An Italian perspective on the Arctic energy grid

Post-doctoral researcher Antonio Caló is an expert in modelling the behaviour of different parties in an energy grid. The role of nuclear energy in the electrification of the energy system fascinates him. Caló’s origins in Italy and the combination of physics and environmental science give him a unique perspective on his field of study and on Finland and its people. 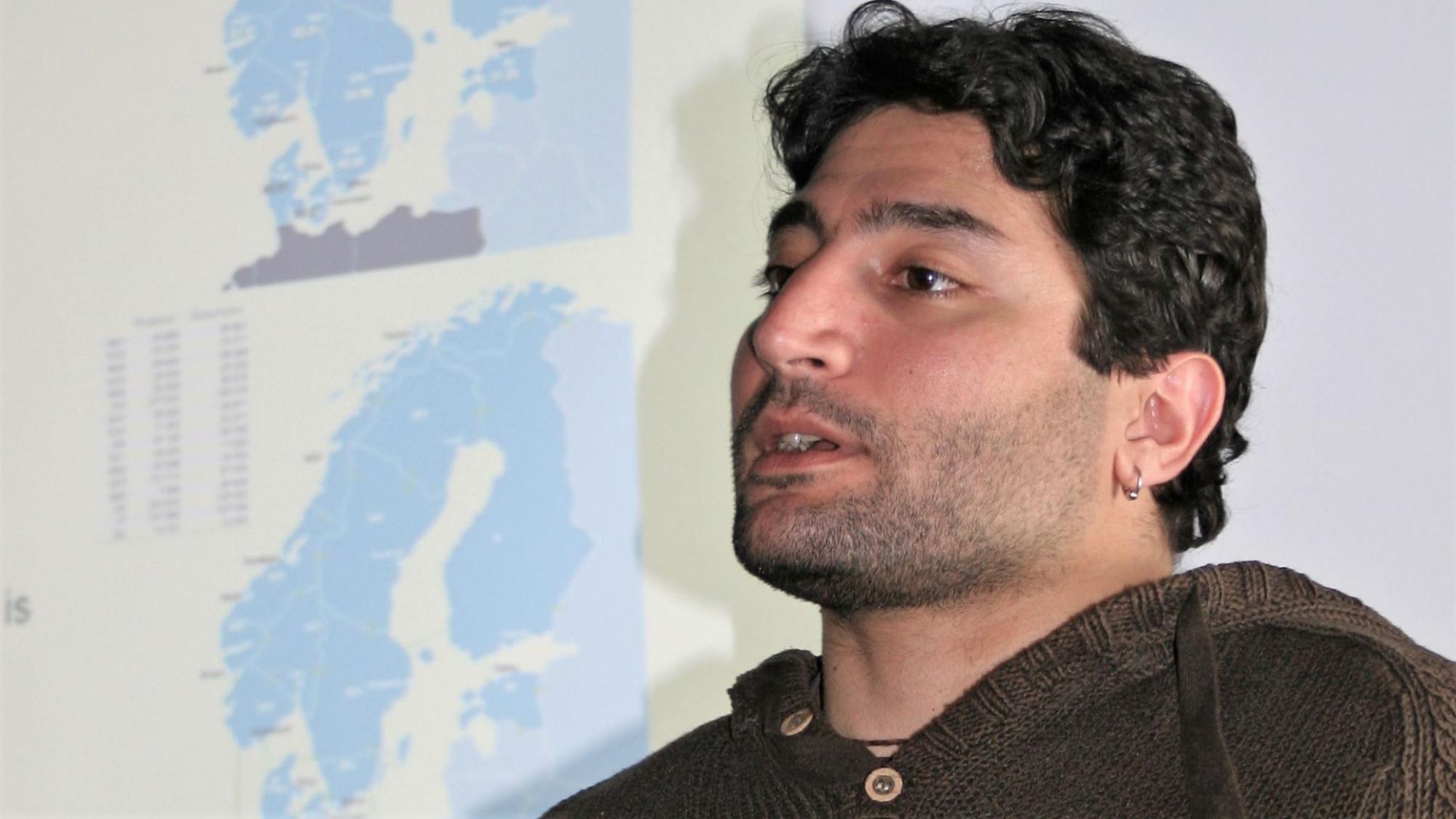 A scientist among engineers

As far and as different as possible – those were the criteria when Italian physics student Antonio Caló was choosing a destination for his exchange year in 1999. For a young man raised by the Adriatic Sea, Oulu was certainly an exotic option. He soon felt a desire to stay.

“I don’t know why, but Finland and Oulu felt like home,” Caló recalls after spending decades in the North.

After his student exchange, he kept in touch with his professors in Oulu. When he completed his master’s degree in physics specialising in education in Bologna, he already had a plane ticket in his hand and a PhD position waiting in Finland.

Caló describes himself as a scientist among engineers. He started as a physicist and studied how the electronic structure changes in molecular systems. These changes can lead to the breaking of molecular bonding in molecular compounds, allowing toxic compounds to be made harmless. This can be utilised in water purification systems, something that Caló was working on at the time.

Projects with environmental connections like that helped Caló see environmental issues, which he had always found interesting on a personal level, from an academic point of view. He subsequently completed a second master’s degree, this time in Oulu and in environmental engineering specialising in energy.

“There are similarities between the molecular system and the energy grid. The same way I used to model electrons in atomic structures, I can model how different users behave in an energy grid. That’s what hooked me,” the researcher says.

Many players in the energy grid

“Historically, energy systems have been centralised, with a few big power stations supplying power to customers and retailers. Now the grid is distributed. Many parties are producing, buying, and distributing energy. We focus on how to optimise the functioning of smart grids. Reducing emissions while maintaining social sustainability and acceptance are hot topics,” he explains.

With a team comprising researchers in different fields, including engineering, physics, history and economics, getting funding for multidisciplinary topics often poses a challenge. Funding from the Arctic Interactions (ArcI) profile theme significantly helped, providing the opportunity to take in master’s and PhD-level students and further develop the overall energy-focused education.

Shift from consumer to user

Together with his team, Caló addresses broad issues regarding the future of energy. Globally, two trends are emerging. Reducing emissions is an immediate one that poses quite a challenge. Caló explains that, with growing populations and improving living conditions around the world, the demand for energy is going to be massive. The need to update centralised energy networks to make them sustainable and broadly accessible is pressing.

“The UN sustainability goals call for access to affordable, reliable, sustainable and modern energy for all. The backbone of such a process relies on efficient access to clean electrical power managed through effective IT-based services,” Caló says.

According to Caló, the second trend is often underestimated. The old model of purchasing and supplying energy does not match the needs of a modern smart grid. Rethinking the entire system might be the solution to the social and economic challenges surrounding the issue. In the future, people might consider themselves as users of a service rather than as consumers of a product. Caló explains:

“If a company sells you energy and tells you to consume less of it, it contradicts their own interest. The solution is to move from selling energy to selling an energy service. The company could then make a contract where it guarantees a certain temperature instead of the energy to provide that temperature. Then it would be also in their interest to provide the service with as little resources as possible. Now we’re on the same side of the fight to reduce consumption.”

In Caló’s mind, the shift resembles, to some extent, the change in providing internet connections. Many still remember using the phone line for internet, which meant that the user paid for the time they spent online. Nowadays, the user pays for the quality of their connection instead. Despite the similarities, Caló’s picture of the future implies a completely different economic system, which is still far off.

Nuclear reactors are getting smaller

Caló also focuses on nuclear energy and its role in smart grid systems. In this regard, the scientist describes himself as an agnostic whose interest is purely intellectual. It is a thrilling time to study the topic, with new technologies on the horizon.

Caló is interested in SMRs (Small Modular Reactors), factory-produced nuclear power reactors that can be built in one place and transported to the destination where they will be used. When it comes to SMRs, size does matter.

“They are designed to be smaller and safer. The heat in a smaller reactor is not enough to cause a disaster, even if the cooling system fails,” Caló says.

At the moment, these reactors exist almost exclusively on paper, but prototypes of SMRs are being developed around the world. A number of countries are going for their own design, and Finland seems to have chosen a distinctive path.

“Here we’re looking at quite a peculiar use for SMRs: district heating. This is revolutionary! Most emissions in Finland come from heating, and usually in nuclear power plants, most of the heat is wasted, but now heat would be the main output and electricity only secondary,” he says.

Studying energy in the Arctic has fascinated Caló from the beginning. For him, the challenges in the North are motivating and thrilling to tackle.

“Around the world, the target is the same: sustainability. Ageing energy systems offer plenty of challenges. But how to achieve sustainability is plugged into a socioeconomic context, and in this regard the North is fascinating. We have the challenge of extreme weather conditions and the challenge of few people spread over long distances,” he explains.

But the North is not all about challenges; there are advantages too. According to Caló, technically Finland has at least as much solar energy potential as Central Europe if panels are properly positioned to collect the snow-reflected sunlight in spring (the so-called “albedo effect”). Also, cooling nuclear power plants is significantly easier in Finland, because of its peak energy consumption in winter and easy access to water.

There is yet another important factor in the North that feeds the Italian’s curiosity and can be a great advantage in developing a sustainable energy system: the Finnish people.

“This country thinks as a community a lot more than others, so it’s easier to have a national conversation about problems, such as where a nuclear power plant should be placed. The Nordic countries have an open mind when it comes to public debate. Working in this environment is a blast,” Caló says with a smile.

Public debate is something that Caló is very passionate about. He likes to engage with people outside the field of science and the energy industry. ArcI funding has helped him forward along this path as well.

Caló and his team deal with a lot of potentially controversial subjects. To him, the role of a scientist in a heated conversation is to be a translator and facilitator between different parties. The fact that an Italian is engaging in public debate about the future of energy in Finland can sometimes be an advantage.

“People outside academia might feel left out, missing out on information. When they see me, they see someone who doesn’t look like an insider. That can be utilised in creating a common ground,” Caló ponders.

That’s exactly what Caló wants to bring to the table: a dialogue with the average citizen, especially the younger generations who are close to his heart.

“People need to decide what to do with the questions regarding energy. And democracy works only if people are informed. But it isn’t enough that I throw the information at them. It needs to be translated so it can be digested. I’m not going to tell you what to think but instead provide the means to make an informed decision, whatever that might be,” he says.

“The people who will run the world when the new energy solutions are a reality are now in high school. My dream is to talk to them more often, to go to schools and educate,” he adds.

Recommends environmental engineering to: People with a proactive attitude and genuine curiosity. “Engineering tends to be more about doing and building, while science is more about understanding. Having a bit of both is a great advantage,” he says.