I am writing this letter to you sat here in my home, next to the crackling fire. The budgerigars are singing away on the branches of the new tree that has just been constructed for them. 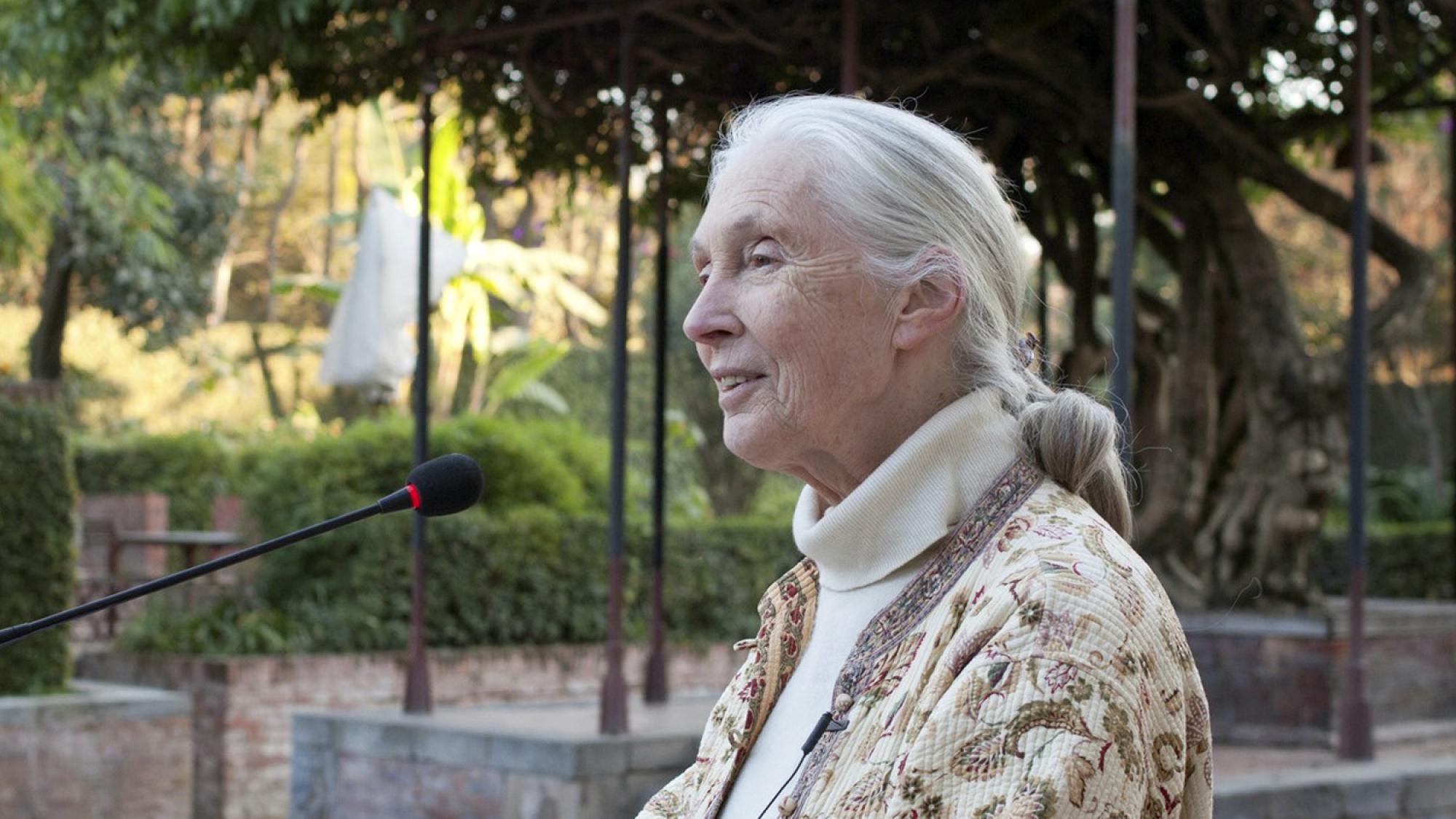 It is now sixty years since my university was established, and next year it will be sixty years since you began your research on chimpanzees in their natural habitat. I imagine that without your pioneering work, without your story, it would not be possible for me to now be researching the relationships between people and animals – the meaning of other animals to life as a human and the reimagining of the meaning of being human.

I am sat under the budgerigars’ tree because I am observing a young spotted flycatcher who has recently moved in and is currently still settling in; at the moment he is sitting on the highest branch. He was found at the end of the summer, unable to fly, and was brought to me to be cared for. Now his wing is fine once again, but all of his fellow flycatchers have flown off to Sub-Saharan Africa weeks ago. If he hadn’t been brought to me, he would have died. Some would say that he should have been allowed to die with his injured wing – that that would have been the natural thing. I often wonder about why we are so sure that we know what is natural, or why we think that nature operates purposefully and that this purpose is good. Who has been telling that story? And is there an alternative one?

Nearly 200 years ago, the poet Alfred Lord Tennyson – in the manner of his peer Charles Darwin – pondered the savagery of nature in his famous poem a part of which begins with the words ‘nature, red in tooth and claw’. For Tennyson, the contradiction was of a religious nature: how to understand the Christian story of love as the foundation of everything and the world as created by God if that creation, nature, is so heartless and cruel? Darwin’s story, interpreted as a battle for survival, has for two hundred years been reinforcing the thought of nature as a cold mechanism in which the strongest and most savage are those that succeed. Richard Dawkins became famous by further refining Darwin’s thoughts in his story of the selfish gene. But you, Jane, as well as other primate researchers, also have other kinds of stories to tell. Your colleague Frans De Waal refutes the story of the selfish gene and posits as life’s explanatory power altruism, rather than the battle for survival, and this an altruism that sometimes even stretches across species boundaries.

You have probably noticed that I talk about stories. I am doing this on purpose, so that the explanations of the world that seem so grand would be set in their place, as shifting stories that can be retold. And so that I would remember that also the information and explanations produced by science and research are stories that were born at some point in time. We researchers use the word ‘theory’, but it is always a question of stories. The philosopher Donna Haraway has in recent times emphasised how there are consequences to the kinds of stories we tell about life. Different ways of making sense of life open up, or close off, different possibilities for the future. These stories also have a direct impact on how we act towards each other – towards other people, other animals, and towards what we consider to be nature.

I heard that when you were a child, you would read Tarzan books and hide in the chicken coop when you wanted to be alone and at peace. I also read Tarzan books as a child. We got them from my grandfather, and I would read them in a room where the bookcase had been made into a temporary birdcage: in the cage was resting a great tit which had collided with a window and was then nursed back to health by my father. I obtained a chicken coop only once I was an adult, and next to it was set up – with the help of my chidren’s father – a sanctuary for injured wild birds. When your choice of career as a primate researcher has later been explained, it seems that time and again – as an idealised cohesive story – these explanations have highlighted the soft toy that your father bought for you from the Harrods department store when you were young: it was a chimpanzee. When researching people’s environmentally responsible behaviour or mapping out the lives of those who become recognised as great thinkers, explanations are often sought from the person’s childhood surroundings and experiences. Even though it has not been possible to clearly demonstrate the connection between childhood experiences and adult behaviour, for example with environmentally responsible behaviour, the story of the causal significance of childhood experiences is strong. So strong, in fact, that expectations are focused on children and educational measures are carried out in order to develop them into the coming generation that will take better care of the earth and of humanity’s future.

Childhood researchers have risen up in protest: children have human rights and childhood has value in itself, not simply as an instrumental stage of life for building the world-savers of the future. And most important of all, an education and upbringing that aims at producing change is significant, but it is not enough if the adult society around these children and young people does not change. Growth does not take place cocooned inside the head of the individual but rather through collective movements – new stories that gradually spread and are eventually being told by everyone, not just children. One such story was set loose by you, Jane.

Perhaps your most important observation, and the breakthrough moment for your scientific career, took place nearly sixty years ago, when you proved that wild chimpanzees create tools. Until that point, the story went that people were the only animals that were able to manufacture and use tools. Your colleague Louis S. B. Leakey claimed that the time for a new story had arrived: ‘Now we must redefine tool, redefine Man, or accept chimpanzees as humans.’ Since then, we have been working on retelling the story of humans and humanity. It is no longer meaningful to distinguish what is not human: we are continually obtaining new information on the abilities and characteristics of other animals. Crows, for example, produce and use tools and are also able to lie to each other, which means that they understand that the mind of the other individual is separate from their own. Other mammals have emotions and, in all likelihood, the same range of emotions as we humans do. Humpback whales use individual names for each other and also collective family names. Their cultures also vary between one ocean and another. Our chickens give names to us people that are close to them. As you were running to the chicken coop as a child, and as I visit my own chicken coop to collect the morning eggs, the chickens repeat sounds uniquely associated with us in order to let each other know who is just arriving.

But if we humans, and particularly researchers, give names to animals we work with, we continue to be in danger. We are accused of anthropomorphism – treating other animals as if they were humans. You spent years sharing your daily life with the same chimpanzees. You learnt to know them as individual persons. When you gave them names, the research community accused you of treating them like humans, and said ‘it would have been more scientific to give them numbers’. You primate researchers, however, were actually at the forefront in creating a new story which tells how other animals also have personalities; a story in which researching other animals through the experiences of living as a human, and even through the relationship between persons from different species, would not be automatically considered unscientific but instead as justified in certain cases or even as the only authentic way to obtain new knowledge.

I gave the spotted flycatcher the name Teppo.

I am part of nature just as that flycatcher is, aren’t I? So one could say that Teppo’s chance arrival into my living room was a natural thing. An unusual and unlikely thing, but still entirely natural. Our natures mix together as I learn to grow mealworms to feed him with and he learns to find them on the small plates laid out in the living room. To Teppo, this new kind of natural behaviour seems easy: he has, after all, crossed his species boundary and is socialising with another species. He has started to make noises together with the budgerigars – noises that do not belong to the normal repertoire of a spotted flycatcher. He also whistles to me audibly if his mealworm plate is empty and he notices that I’m in the kitchen. Within our house, a complex kind of natural order is developing – a kind which challenges individual-centred and limited stories and instead produces the new beginnings of a story of shared lives with shifting boundaries. We hope and believe, however, that this small insectivore will not become too tame, but that it will be possible to set him free once again when spring comes and its fellow flycatchers return to Northern Finland.

PhD, Adjunct Professor Pauliina Rautio works as a Senior Research Fellow in the Faculty of Education. The research project she leads – AniMate – belongs to the research unit of Teachers, Teaching, and Educational Communities.