UArctic Research Chair, Professor Jeff Welker and colleagues have received funding from the Finnish Ministry of Foreign Affairs (FMoFA) to lead an isotope forensics study of the Arctic’s water cycle at the seasonal transition between winter and summer during sea ice melt into the High Arctic between NE Greenland and Svalbard, the Fram Strait. 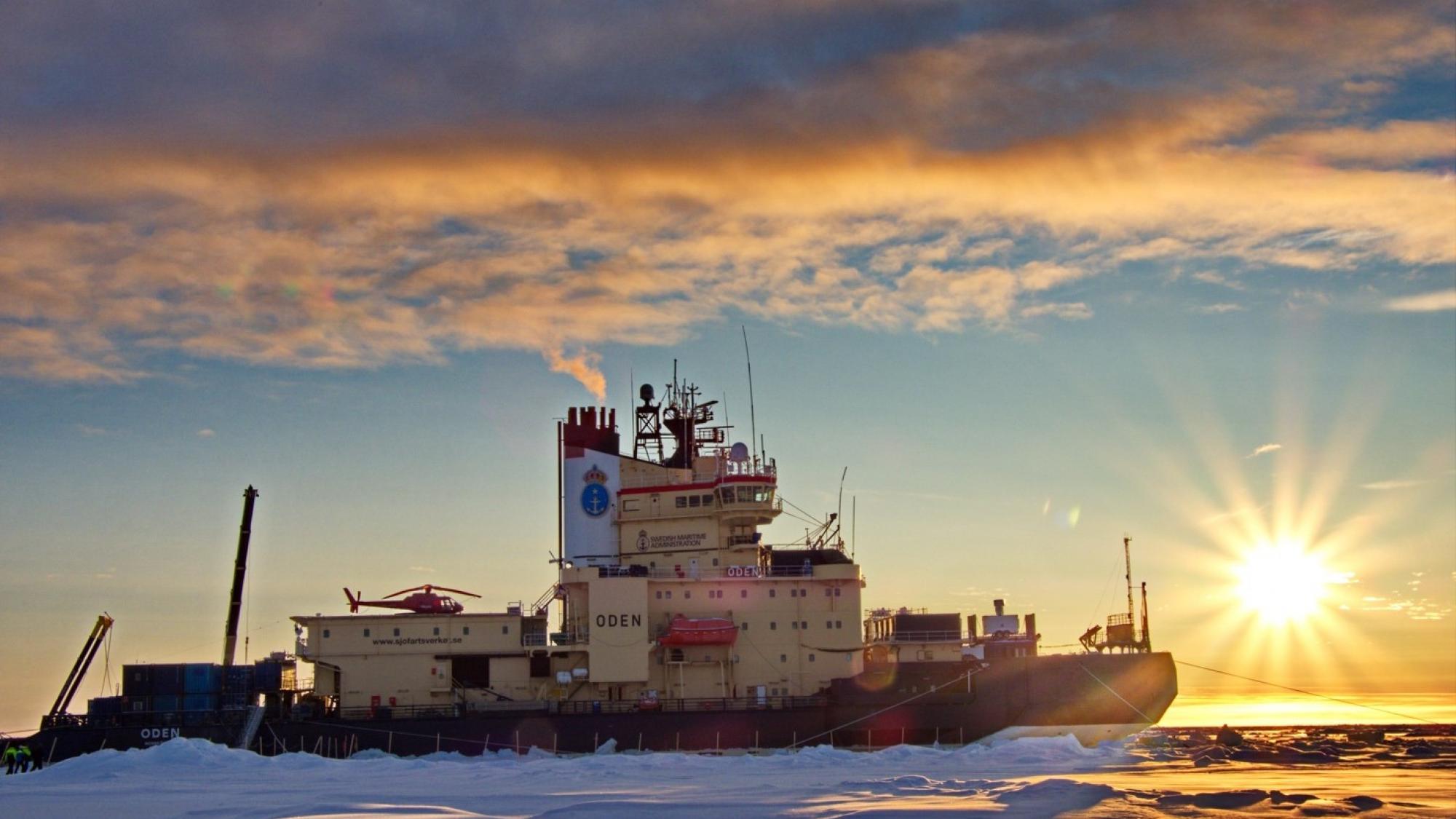 The I/B Oden in the Eastern Arctic during late winter when the sun is just coming back to the north.

This international endeavor aboard the I/B Oden, sponsored by the Swedish Polar Research Secretariat and lead by Stockholm University, has been 3 years in the making and will take place in May and June of 2023. The research expedition will involve scientists from numerous Arctic countries (e.g. Finland, Sweden, the US), multiple UArctic Universities and from 20 + different research teams from across the north. This interdisciplinary program will address the interactive nature of atmospheric processes, sea ice conditions and ocean currents before, during and after the intrusion of warm Atmospheric Rivers into the High Arctic as they deliver conditions that flip the Arctic’s winter conditions into spring and towards summer.

Welker’s team will carry out an entire suite of continuous atmospheric water vapor and sea water isotope (d17O, d18O, d2H, d-excess & 17O-excess) measurements over the duration of the ~45-day expedition. The water vapor and sea water isotope measurements are key to tracing the sources and processes associated with moisture transport into, within and out of the Arctic and to delineate water masses and currents during these major weather events driven by atmospheric transport patterns.

The University of Oulu’s Arctic water isotope program will include the first ever marine boundary layer profiling of the Arctic’s water vapor isotope properties measured by the German HELiPOD. These vertical profiles will be accompanied by spatially extensive horizontal water vapor isotope measurements within a 10-15 km radius of the I/B Oden. These HELiPOD measurements will be in collaboration with Dr. Astrid Lampert from the Technical University, Braunschweig, Germany.  And, there will be simultaneous aerosol and cloud physics measurements by Dr. Paul Zeigler from Stockholm University as part of the HELiPOD campaigns, before, during and after Atmospheric River events.

The HELiPOD is a sophisticated drone that is tethered below a research helicopter by ~ 50 m.  This drone-like device has a payload capacity that allows numerous in-situ atmospheric chemistry devices to carry out continuous measurements (e.g. Welker’s water vapor isotopes) across large regions surrounding the ship, including vertical profiles that may be up to 1000 m.

This Finnish MoFA award to Welker’s team, including Dr. Hannah Bailey, includes a joint award to Dr. Timo Vihma and his research group, including Dr. Tiina Nygard, at the Finnish Meteorological Institute in Helsinki. Dr. Vihma’s group has a long history of studying Arctic atmospheric transport and the foundations for the mechanism of Arctic change and amplification. Welker and Vihma’s team have plans for combining the water isotope forensics data with modeling practices in unique ways that broaden the understanding of the sources and processes that drive and feedback to weather and climate during seasonal transitions in the Arctic.