The GenZ Foresights seminar was hosted at Tellus Stage on Linnanmaa Campus on Wednesday, June 8th. In the multidisciplinary seminar, top international scholars gave keynote talks about the core challenges and questions related to human-centric digital futures. The seminar brought a close to a week of GenZ Advisory Board meetings. 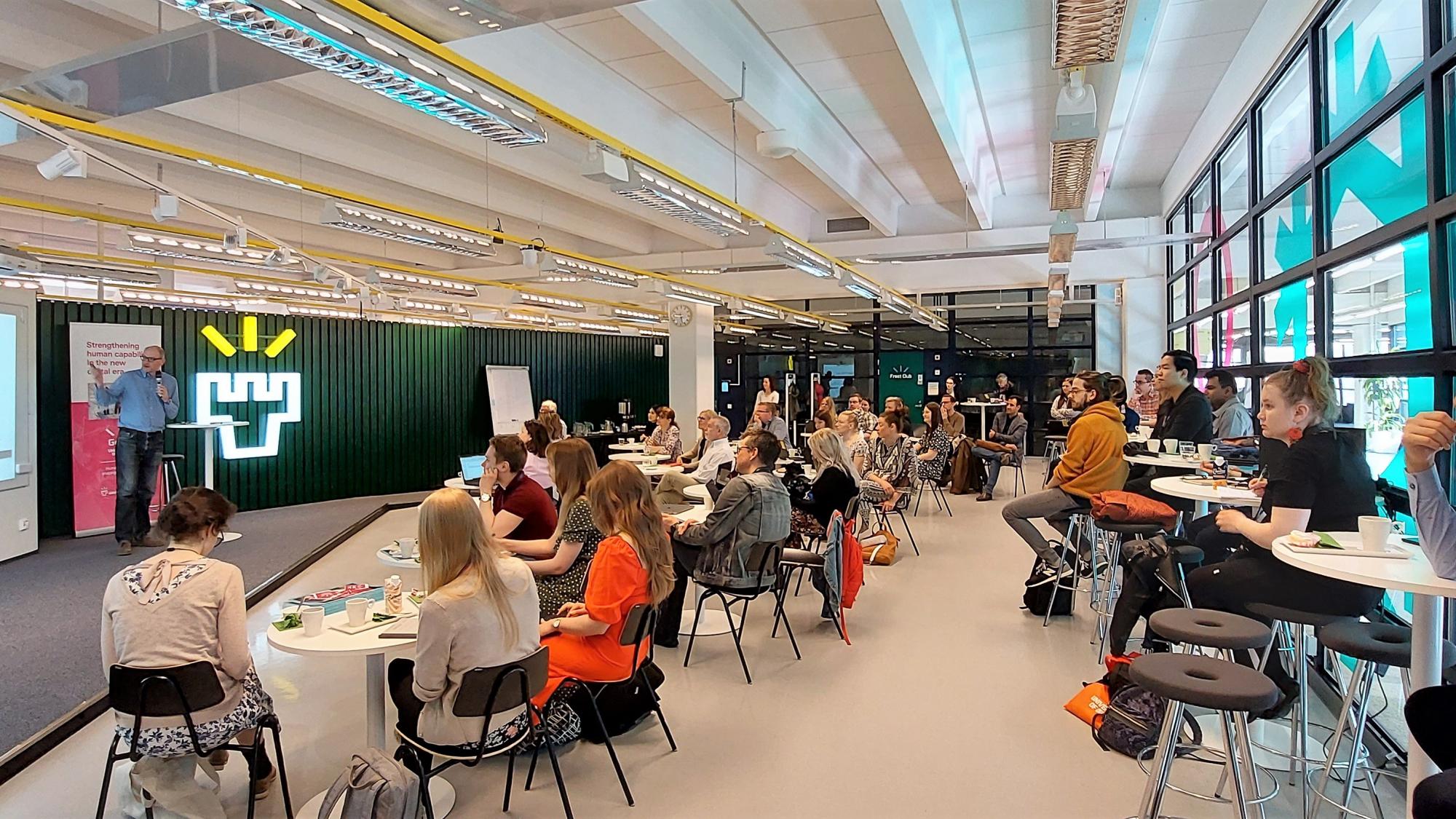 The keynote speakers and members of the GenZ Advisory Board, Professors Denise Agosto, Phil Winne, Jouke van Dijk, Michael Hall and Niall Winters each approached the GenZ’s future-oriented “foresights” theme from different scholarly backgrounds and with different topics and methodologies. Agosto elaborated on the role of culturally situated factors on Genz’s digital literacy, while Winne’s focus was on modelling the cognitive side of learning in the human mind. Winters extended the GenZ themes of co-evolution and co-creation into designing technology to meet the needs of marginalised communities worldwide. Hall discussed aspects pertaining to the intersection of sustainability, digitalisation, and tourism, while van Dijk presented a study of cross-border commuting between EU-countries and its potential effects on improving economic inequalities. Overall, the variety of the keynote topics presents GenZ’s core as a cross-section of different disciplinaries. Although the keynote topics differed in their content and angle of GenZ, the unifying and emergent theme in the talks was the need to promote multifaceted human-centric views in the world where digitalisation is ubiquitous. As expressed by GenZ director Pentti Haddington, we cannot assume that all people have the same skillsets, availability, and opportunities to use technology and act in the digital world. We need to understand marginalised communities and broader social inequalities to fully integrate the human perspective into digitalisation.

In her keynote talk, Denise Agosto discussed young people’s skills in digital literacy and the factors that intervene with these skills. Agosto is a Professor and Director at the College of Computing & Informatics at Drexel University, Philadelphia, Pennsylvania. Her research has, for instance, examined how young people engage in information practices. According to Agosto, young people go online for four main reasons: for social connectivity, to alleviate boredom, to satisfy curiosity and to express creativity. Some of the features of young people’s information practices online include the use of multiple platforms and contexts, as well as understanding the interconnectedness of digital media. The act of creating memes, for instance, can be viewed as an act of encoding digital literacy. The idea of the generation Z being born digitally native is, however, a rather harmful myth. Agosto noted that culturally situated factors – such as privilege and power – determine how skilled a young person is in digital literacy. Making broad generalisations about young people’s ability to handle technology is thus unfair, and as noted by Pentti Haddington, it also dispels the responsibility from older generations to guide young people in the vastly digitalised world. Agosto concluded her talk by pointing out that the best experts of generation z are the young people themselves – strengthening the human perspective in the current digital age is thus called for.

Niall Winters continued on the notion of technology, power, and privilege. Winters is a Professor of Education and Technology at the Department of Education, at the University of Oxford, England, and he is also a Fellow of Kellogg College. Winters has been organising and participating in projects in sub-Saharan Africa, for instance in terms of educating local healthcare workers to use technology as an aid in their everyday practices. Winters mentions learning technologies, social justice, and health as his key research interests. He began his keynote talk by introducing various views of promoting digital education within marginalised communities. The social justice approach, as explained by Winters, aims to identify what constitutes disadvantages for some people, and how digitally mediated learning can, in turn, be designed to empower marginalised communities. Because technology is subjected to power dynamics, co-evolution and co-creation practices are needed to design technologies and digital learning methods to meet the needs of these communities. Overall, Winter’s research displays an incentive to understanding technology and its implications at a more comprehensive level.

The need for co-creation was also underlined by Phil Winne in his keynote speech. Winne is a distinguished SFU Professor at the Faculty of Education at Simon Fraser University, Canada. In his keynote speech, Winne first discussed the weaknesses of randomised controlled trials in generating data for research within the field of learning science. Winne explained that better, more human-centric methods are needed to fully incorporate the profile of a self-regulated learner into research. A self-regulated learner, as expressed by Winne, is somebody who engages in various cognitive processes and reflections, such as rehearsing and assembling, and attempts to make the world work for them with the available tools. Motivation, in Winne’s view, is essentially a decision-making activity. Winne expressed that “interventions (in the randomised controlled trials) are weak bets about how learning is guided because learners self-regulate learning.” To move towards better methods, we need to evolve our understanding of the conceptual categories as outlined in RCTs and integrate the profile of a self-regulated learner into these methods. Winne introduced the nStudy, which is a newly developed, state-of-the-art Chrome extension, whereby learners can utilize several tools to make sense of the information presented to them. Learners can, for instance, use bookmarks, quotations, notes, and tags. According to Winne, notes are a way to structure one’s thinking and they promote learners’ cognitive and reflective processes, such as rehearsing and assembling information with the help of technology.

Michael Hall extended the theme of human-centric digital futures into planetary-centric digital futures in the context of contemporary tourism. Hall is a Professor in Marketing in the Department of Management, Marketing and Entrepreneurship at the University of Canterbury, Christchurch, New Zealand, and he participated in the seminar remotely. Hall noted that tourism, indeed, is at the heart of digitalisation. The role of social media, and the rise of different digital platforms, such as Airbnb and Uber, continue to shape contemporary tourism. These digital platforms and other manifestations of the so-called “smart tourism” generate environmental and social impacts, which have not received sufficient attention.

Hall proposed the question of how tourism could be developed in a more socially and environmentally sustainable direction. Hall referred to the “ABC model” used to explain the aspects driving sustainable consumption. The logic of the model is the following: Social change is thought to depend upon values and attitudes (the A), which are believed to drive the kinds of behavior (the B) that individuals choose (the C) to adopt, and to which the service providers will respond to. Hall suggested moving beyond the ABC model into seeking top policies and interventions. GenZ Assistant Professor Siamak Seyfi from the Geography Research Unit (GRU) agrees with Hall, expressing that decision-making at an individual level should not be promoted, as individuals are not equipped to making such large-scale decisions entailing complex social and environmental consequences. Seyfi envisions a more sustainable future for tourism, a shift towards “slow tourism.” Hall invited the participants to reconsider the concepts of better digitalisation, resilience, sustainability and even redefining the common ‘tourist experience’ in itself.

The multidisciplinary and all-encompassing nature of GenZ

The keynote talks given at the seminar worked to evoke the multidisciplinary core of GenZ. The GenZ theme co-evolution was present in Winne’s and Agosto’s keynotes, while Winters emphasized co-creation in his keynote. Van Dijk’s and Hall’s research relies on the GenZ theme resilience, which aims at developing systems that can adapt to changes and new requirements. Agosto, Winters, Winne, van Dijk, and Hall offered different perspectives to GenZ, but the core viewpoints that arose from the talks were quite similar. Haddington words these viewpoints as the need to understand how technology affects all people worldwide, especially marginalised communities. Haddington also notes that in light of digitalisation, we need to understand what learning means and how it is regulated in digital environments. Professor Sanna Järvelä from the University of Oulu’s LET research unit draws emphasis on the need for a multidisciplinary dialogue to tackle the core GenZ questions. Bringing together scholars from diverse backgrounds and fields enables us to reach more multifaceted solutions to the current challenges with digitalisation. After all, the themes and core questions of GenZ extend to different contexts and communities, as was shown in the seminar.

Read more about the core Genz themes and questions in the GenZ white paper. (http://jultika.oulu.fi/files/isbn9789526231471.pdf)