High-strength steels are one of the main focus areas at the University of Oulu Centre for Advanced Steels Research. They relate to another central theme, climate goals. 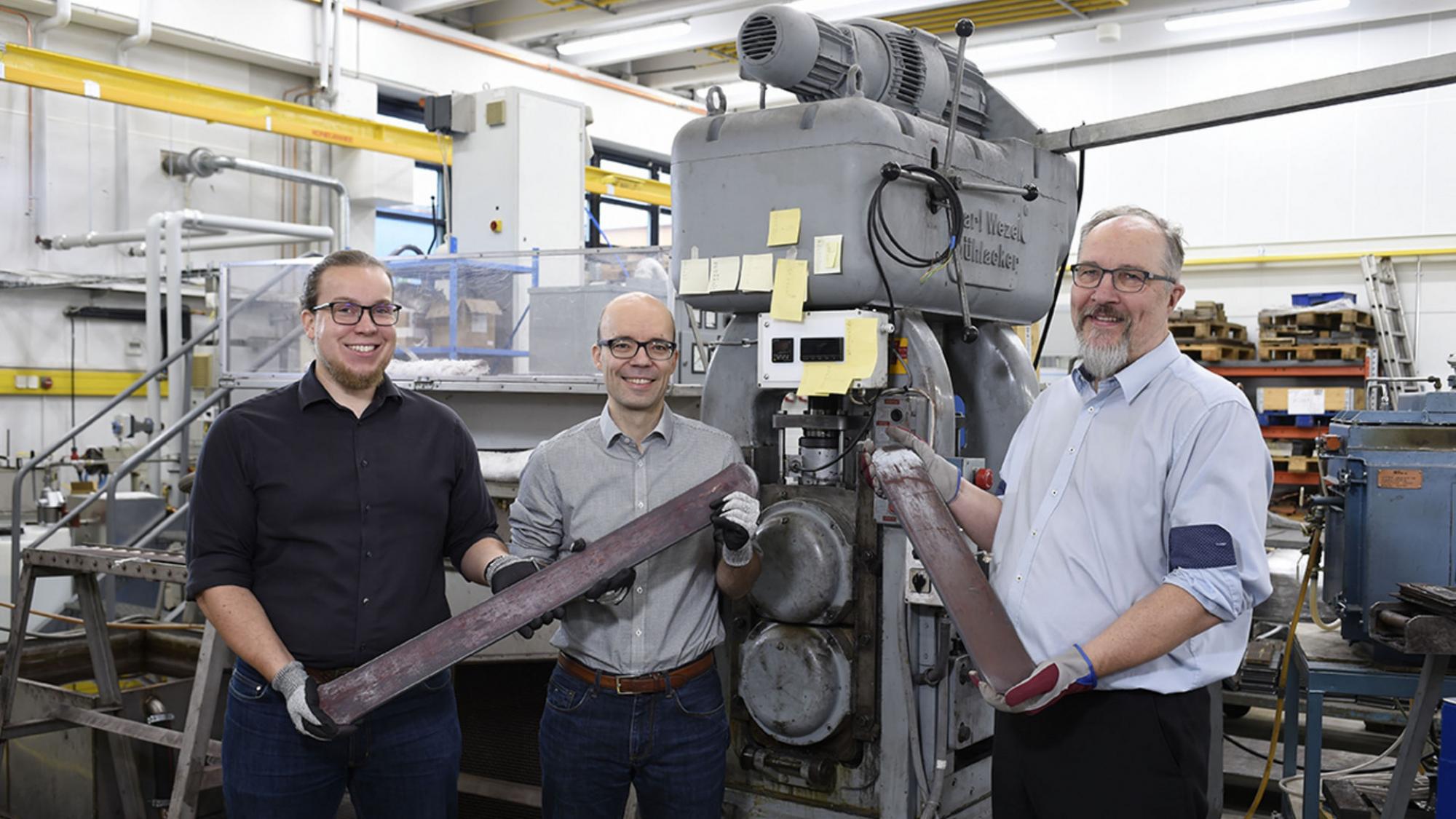 “Ordinary steel can withstand yield stresses of approximately 20 kilograms per square millimetre. The strength of high-strength steel, by contrast, is such that a square-millimetre-sized piece could support my weight”, explains professor Jukka Kömi, Head of Unit at the Centre for Advanced Steels Research (CASR).

This is a generalization, because no single definition exists for high-strength steel. Industry considers steel with a tensile strength starting at slightly above 500 megapascals (MPa) high-strength, and possible applications are being studied for the 1,000 MPa strength described by Kömi. CASR has already worked with the 1,000 MPa strength class for some time, and is now aiming at over 2,000 MPa by means of both basic and applied research.

There are about 40,000 different commercial steels, but reaching a strength of 2,000 MPa is still largely a scientific pursuit. The university of Oulu ranks among the world’s top three scientific institutions in the study of high-strength steels, says Jukka Kömi.

“We are conducting applied research in collaboration with industry, and the chosen applications are determined based on the needs of the collaboration. Basic research, on the other hand, is heavily physics-oriented, with the main focus on understanding the behaviour of atomic structures”, Kömi continues.

While the amounts required in certain applications can rise to thousands of kilograms, the properties of steel – including strength – are determined on the atomic and molecular levels.  This is reflected in the way high-strength steels are made, as the utilization of various elements in alloying and the management of the steel’s internal structure and impurities constitute the main trends in the context of manufacturing methods. CASR is primarily focused on the latter two areas.

“In order to control the mechanical properties of large objects, it is necessary to focus on the smallest details. We have gone from discussing structural units in terms of micrometres to nanometres today. Understanding the composition of nano-sized constituent units and the effects they produce with regard to the properties of steel requires microscopes with almost atomic-level resolution. It is now also possible to represent the atomic structure of steel in 3D.”

As far as impurity management is concerned, liquid steel is the most critical phase and thus the most pertinent focus for research.

“It is inevitable that other materials are introduced into the steel along with alloying elements”, explains Professor of Metallurgical Processes Timo Fabritius.

“These are only parts per million (ppm), but the limits are very strict. Purity determines whether the steel is able to withstand the necessary stress.”

The enormous scale and heat entailed by the processes makes measuring difficult, however. Simulations and modelling, which are among the University’ specialities, offer one solution. They involve small-scale replications of processes which industry can then implement in practice. Phenomena related to liquid steel can be subject to both experimental and computational simulation.

“When we’re dealing with tonnes of steel, we can’t calculate everything. Sufficiently effective simplifications are therefore required, and we have developed methods for this purpose.  When it comes to representing phenomena related to liquid steel, our expertise is unique in the world”, says Fabritius.

One milestone the team has reached was analysing the light produced by the furnace’s electric arc, which even gave life to a spinoff company, Luxmet.

“When using an electric arc furnace, we don't know the exact composition of the raw materials placed in it, and so we operate on the basis of a guess. This method allows us to make more precise determinations regarding the composition.” Fabritius also highlights the so-called “rapid inclusions analytics” currently under development.

“Inclusions are a kind of impurity. With the help of rapid inclusion analytics, we can monitor the cleanness of the steel during the process. Prior to this innovation, only retrospective monitoring has been possible.”

The use of recycled steel results in a greater need for purity control. In Finland, almost 100 percent of steel is recycled, and the global figure has reached 80 percent. Steel recycling also serves to reduce energy consumption and carbon emissions in the steel manufacturing industry.

Climate goals are not only centrally important at CASR but also relate to its focus area, high-strength steels. “They allow us to control weight better, which in turn helps reduce the associated carbon footprint”, says Kömi.

“The lighter the structure, the less energy is required for its transport, for example. This means that tripling the strength of the steel proportionally reduces the weight of and emissions from vehicles such as cars, trains and ships.”

From this perspective, the automobile and transport equipment industry constitutes CASR's most important partner. CASR does not work with each manufacturer individually, but participates in cooperation networks. The University of Oulu specializes in steels that can be used e.g. automobile safety components.

In addition to its strength, the production methods of steel also have a substantial impact on emissions. With regard to production methods, CASR's goals are twofold. It focuses on the energy efficiency of production processes as well as replacing the carbon used in iron oxides reduction.

“The goal is to constantly lower the production temperature and speed up the process”, Timo Fabritius explains. “Some of the reduction can be done while the material is in a solid state. But as carbon is used in the process, carbon dioxide is produced. Research has been conducted on the extent to which hydrogen could replace carbon in the reduction processes that are currently used.”

A completely hydrogen-based process is already possible under laboratory conditions, but it differs substantially from that used in actual production. Furthermore, there are a number of other challenges related to large-scale production with regard to the production methods and storage of hydrogen.

“The possibility of using hydrogen would be a game changer for steel production, but the transition will take at least 20 years”, Fabritius says.

According to Kömi, hydrogen-based production would result in a seven-percent reduction in Finland’s carbon emissions. Another seven- or eight-percent leap could be achieved if heavy goods vehicles transitioned to using high-strength steels. CASR has set its overall goal at 15 percent.

CASR’s most recent achievements include the production of steel in the 2,000 MPa strength class, which retains its toughness at temperatures as low as -100 degrees Celsius. Each grade of steel has a limit temperature below which it becomes brittle, and while some steels retain their toughness even past this limit, they nevertheless become softer.

The tempering and hot rolling techniques studied at the University of Oulu play a central role. “Without them, the steels remain tough only at positive temperatures”, says Pallaspuro. “It is crucial that

we are able to reach the -50-degree level using methods that are more efficient than those of our competitors both in terms of cost and energy.”

These types of steel, suitable for icy conditions, represent a continuation of Finnish leadership in the Arctic steels market. CASR’s partners include the leading icebreaker design company Aker Arctic. Cold resistance constitutes the greatest challenge for Arctic maritime technology, but its scope goes beyond temperature alone.

“Hydrogen embrittlement is another potential danger in cold and humid conditions. If sufficient amounts of hydrogen are present, steel becomes brittle. And in Arctic conditions, we are faced with both the cold and a source of hydrogen. We are looking into ways to increase the hydrogen resistance of steel, and have already demonstrated that hydrogen embrittlement is also possible at negative temperatures. Previous studies have focused on temperatures no lower than the approximately four degrees Celsius of sea water.”

As is the case with purity management, controlling hydrogen embrittlement also hinges on concentrations of parts per million. Solving this challenging problem holds a pay-off, as the demand for cold-resistant steel is boosted by activities such as oil extraction in Arctic waters.

High-strength steels are useful in a wide range of applications, and no viable substitutes are currently on the horizon. Changes to various phases of the production process are required, however, which means that industrial limitations are a key piece of the puzzle.

“Design, forming and connecting processes will need to be rethought completely. 80 percent of the factors preventing the use of high-strength steel stem from design-related problems. It is not enough merely to produce high-strength steels, but we must also think about how best to incorporate them in the final product”, Kömi says.

This task is made more complicated by the fact that no standards exist for high-strength steels. As a result, it is the designer that bears the responsibility for safety and other relevant factors. The 112-metre emergency ladders designed by CASR partner Bronto Skylift serve as an illustrative example.

“In the case of such a product, the designer must be certain that the steel can withstand the stress.”

Current steel technology is not, however, by any means pushing up against the upper limit of strength, as 80 percent of the strength of iron's atomic bonds is yet to be tapped. And thus work on the development of high-strength steels continues. Sakari Pallaspuro gestures to his colleagues, and articulates the team’s goal:

“We want a steel so strong that a square-millimetre-sized piece could support all of our weight combined.”