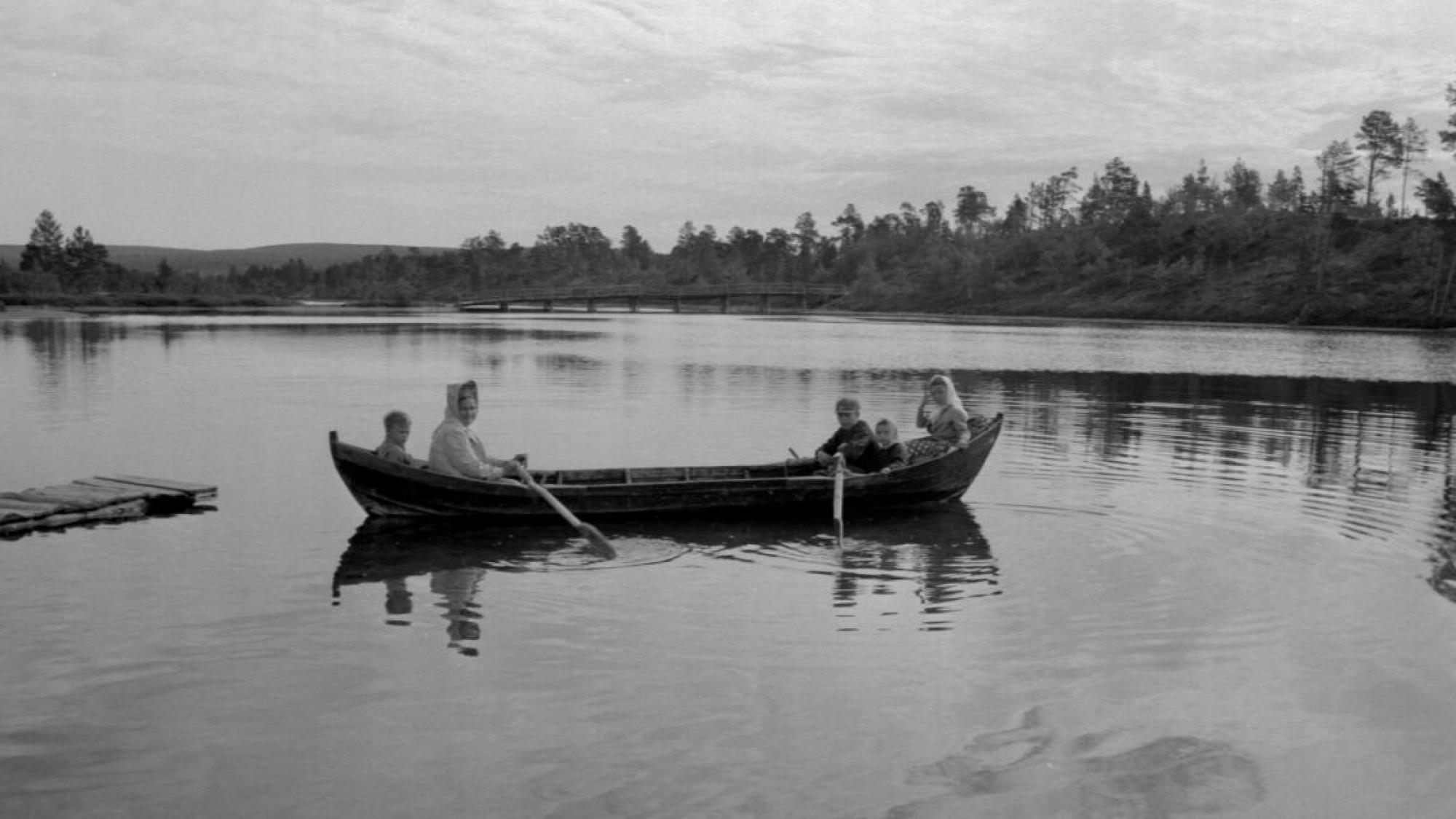 The present day Skolt Saami community requires material for maintaining their language and cultural ability. In the Finnish archives there is a large collection of archive material, gathered from the Skolt Saami during the 20th century, which can be used for revitalising purposes. The Skolt Saami Memory Bank is a new operational model, consisting of both data management of archive sources and organised culture revitalisation, returning the immaterial cultural heritage of the Skolt Saami community. The project will be conducted in co-operation with the already existing network of cultural and social institutions operating in the Saami home area (Sámi Parliament, The Sámi Education Institute, SámiSoster, Sámi Museum Siida and the Giellagas Institute of Oulu University).

Site of research: University of Oulu, The Giellagas Institute
Funding: The Project is funded by the Academy of Finland
Principal Investigator: Postdoctoral Researcher, Ph.D. Marko Jouste

The project will support the utilisation of results from the Principal investigator Marko Jouste's present research Historical Turning Points of Multilayered Music Tradition among the Skolt Saami in Finland. At the same time it will help the Skolt Saami community to preserve, revitalise and develop their own traditional music culture.

As a new feature, this project includes active culture work and workers, creating an interaction between archive research and the Skolt Saami people. This interaction is designed to serve many different interest groups, ranging from language nests to academic research. Archive material can be used in teaching at various levels. Historical recordings of music and storytelling can strengthen knowledge of Skolt Saami oral history, and present day artists and entrepreneurs can benefit from the archives even in the form of sustainable commercialisation of Skolt Saami cultural heritage.

The scientific work will take place in the Giellagas Institute, whereas the active culture work will be carried out in language nests, schools, retirement homes and in pursuance of other culture activities. In addition to the principal investigator Marko Jouste, MA Markus Juutinen and BA Miika Lehtinen work in the Saami Culture Archive and prepares Skolt Saami archive material for the use. Anna Lumikivi and Hanna-Maaria Kiprianoff, Skolt Saami research assistants operating actively in the Skolt Saami community, will publish data from archive collections as a part of the project. The evaluation of the project will be published in scientific articles by the PI.

What makes the Memory Bank unique is that it contains both organised and analysed research data (e.g. musical notations, transcriptions, audio files with annotations) and original Skolt Saami music and language material (audio, video, photographs, manuscripts). Therefore a notable amount of the material is ready for cultural use. This work has been actively done for many years with the support e.g. The Academy of Finland. Being linked to the question of the indigenous people’s rights to their own cultural heritage, the repatriation is in the core of the whole project, in co-operation with Skolt Saami community. Indigenous involvement means the strong role of the Giellagas Institute and the participation of two Skolt Saami research assistants. These themes have also been emphasised in the work of UNESCO and World Intellectual Property Organisation, and they are a part of the national and international agreements concerning the rights of the Saami people.

Skolt Saami Memory Bank is a tool for repatriation of original archive material used in the study of principal investigator. Practical objectives are divided into three parts:

2) Organised interaction between the archive, users of archive material and research results

The work done in the Saami Culture Archive and Giellagas Institute has both national and international connections. Within this project the partners represent public administration, but also the non-profit sector and business can benefit from revitalising of a local culture. The main partners in the Skolt Saami community are:

By combining the scientific research, availability of the archive materials and active culture work done by the Skolt Saami themselves, the project will support the skills of the present day tradition holders. The hypothesis is that this will lead to improved local environment for cultural activities and new learning materials. Furthermore, this process most likely boosts a new kind of culture work needed in educational, social and culture sectors. It can also support musicians and artists to develop their artistic work. This is notable, since nowadays there are plenty of work opportunities for artists: music festivals, concerts, school tours, radio and television. The project is very likely to have some impact on culture based tourism as well, since cultural activities often attract travellers to come to the Skolt Saami area.

There are also several current language documentation and linguistic research projects working on the Skolt Saami material, many of them developing language technological solutions, to which the Saami Culture Archive's Skolt Saami Memory Bank project is linked. The connection has been established as Network on Saami Language Documentation and Description in A Seminar on Saami language documentation, research and the use of language technology hosted by Giellagas Institute of the University of Oulu in December 2015. The cooperation continued in a seminar on Skolt Saami organised by Sámi Giellagáldu in Sevettijärvi 27.1.2016.

The most important partners are: In the University of Freiburg, Germany there is The Freiburg Research Group in Saami Studies, with a special program for language documentation and the use of language technology in research of Saami language (PI Ph.D. Michael Rießler). In Giellagas Institute and Saami Culture Archive in University of Oulu there are two ongoing language projects: Giellagas Corpus of Spoken Saami Languages and Máinnasheargi project. The Department of Modern Languages of University of Helsinki hosts two important projects on Skolt Saami language: Skolt Saami documentation project (PI Professor Matti Miestamo) and Skolt Sami revitalization ICALL-project and the development of guidelines for its application in other endangered languages (PI Ph.D. Jack Rueter). In addition to many other institutions, especially in Nordic level, national co-operation with Finnish sound archives preserving Saami material (i.e. The Society of Finnish Literary, the Institute for the Languages of Finland and the Cultural Archives of the University of Turku) is very significant.

The research and revitalisation work will be conducted following the rules of research ethics guidelines provided by the National Advisory Board on Research Ethics appointed by The Ministry of Education and Culture and used by the Academy of Finland. In addition, in the research and projects concerning indigenous peoples, ethical questions are particularly important.

This research follows the ethical codes of the University of Oulu and Saami Culture Archive (The Giellagas Institute). An important part of the work of the Saami Culture Archive focuses on the legal issues and questions on the rights to the material gathered from the indigenous peoples. These themes have been emphasised in the work of UNESCO and World Intellectual Property Organisation, and they are part of the national and international agreements concerning the rights of the Saami people.

The study on legal issues and ethical questions is done in co-operation with University of Lapland by a lawyer Piia Nuorgam in a report on the legal questions concerning the Saami Culture Archive’ (Nuorgam 2013).

The Skolt Saami Memory Bank functions as a pilot case, which may be of benefit to collections of other ethnic and minority cultures found in sound archives both in Finland and in the Nordic countries.

Possible risks lie mainly in the lack of support from the community would endanger the objectives of the project. In addition to on-going discourse in the Skolt Saami community, there are two Skolt Saami research assistants. The research is carried out in the Giellagas Institute, which is governed by Saami, and in close co-operation with other Saami institutions. The principle of supporting a local culture and providing assistance and material for the revitalisation of the culture also strengthens the co-operation. This further reduces the risk of revealing sensitive material, which could insult local people. The contacts between Skolt Saami community and Giellagas Institute have already been established during the earlier project. The project will organize opening and closing seminars of the project in Inari for informing the Skolt Saami about the project and welcoming them into discussions about the culture revitalisation and use of the archive material.

There have been earlier attempts to revitalise Skolt Saami music culture by providing archive material to the use of Skolt Saami community. Some of these have failed, like one in the early 1990s, probably due to lack of resources to deal with notable archive collections still on analogue tape. Since then, the Skolt Saami material has been digitalised by the archives, which helps data management.

The principal investigator organised the research and publication of a book and a CD was successful, as the objective was small enough to be achieved (see Jouste, Moshnikoff and Sivertsen 2007). During the last ten years, there have been projects inventorying and cataloguing the Skolt Saami material.

Hypothesis is that revitalising process and interaction between researchers and local community can most likely succeed when there are enough local people involved with education in the field of culture. Revitalising process also requires some institutional structures, where revitalising work can be organised. There has been a positive development in this sector. The project has been able to establish partnership with all the main Skolt Saami cultural institutions.