Nano and Molecular Systems Research Unit has research infrastructure for studying electronic properties of matter in all forms. Methods include electron spectroscopies, fluorescence spectroscopy, mass spectrometry and fragmentation analysis as well as electronic state selective coincidence studies. Our laboratory in Oulu is specialized in test measurements for synchrotron light sources and for developing and building research instruments.

The unit has a strong contribution to the Finnish-Estonian Beamline for Atmospheric and Materials Science (FinEstBeAMS) located at the 1.5 GeV ring at MAX IV Laboratory synchrotron radiation source in Lund, Sweden. 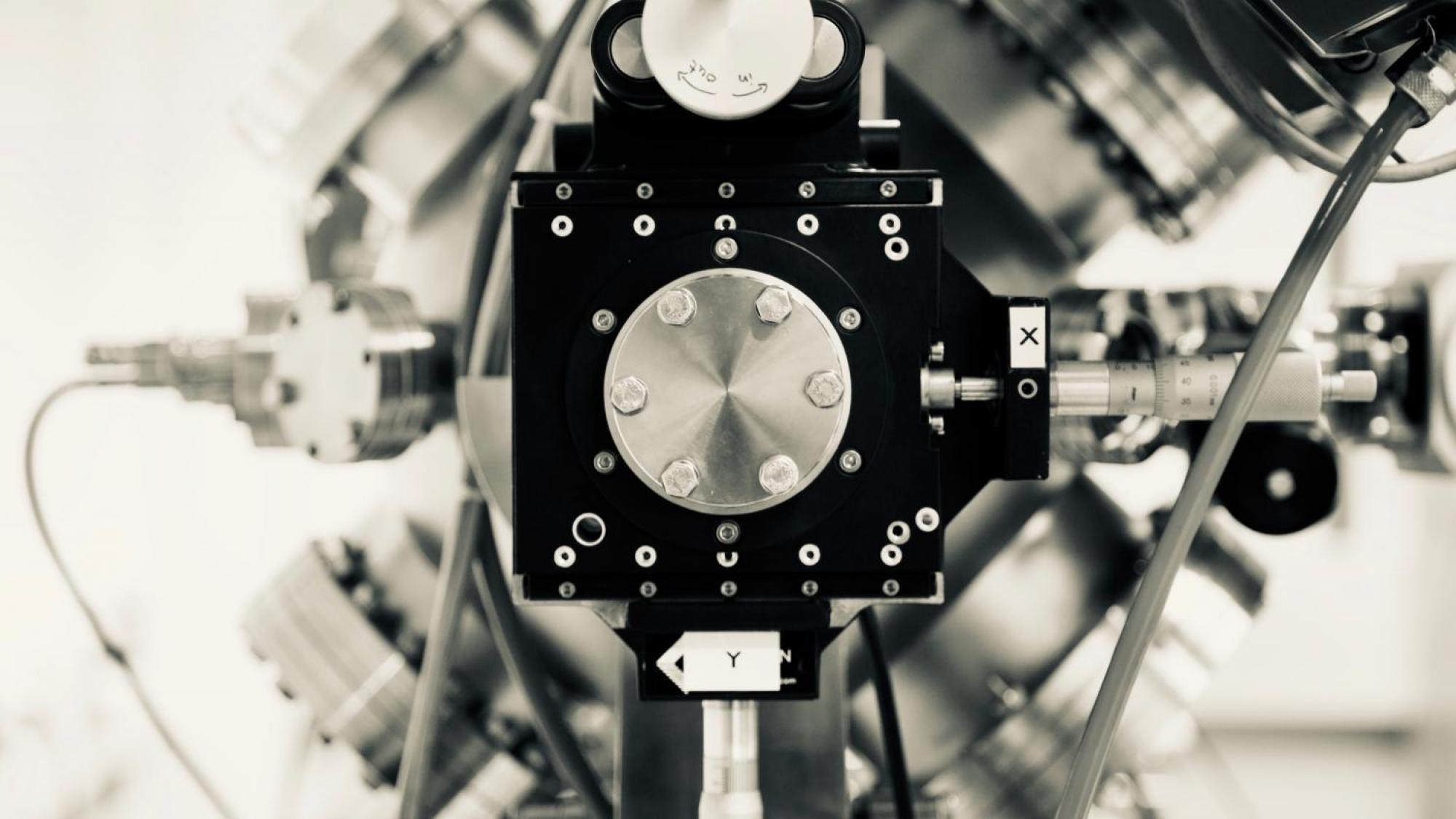 The group's Oulu laboratory hosts materials research infrastructure for studying the electronic properties and interactions from atomic and molecular vapors to free unsupported nanostructures as well as condenced phase of matter. Most of the equipment is custom engineered and manufactured and/or tailored to provide best accuracy possible for users in Oulu laboratory and in international radiation source facilities. With instruments in Oulu, the group can perform test measurements and experiment development before entering a beamtime at synchrotron radiation facilities. A crucial function of the laboratory in Oulu is also to train the masters and PhD students to the experimental work.

Some examples of the experimental setups

The group has two hemispherical analysers made by VG Scienta (SES100 and SES200) which are suited for measuring electron kinetic energies with high resolution. Either of these can also be used as part of an electron-ion coincidence setup where ions are detected using a selfmade Wiley-McLaren type time-of-flight spectrometer with position sensitive detector.

The group is currently building a magnetic bottle-type electron spectrometer which benefits from electron collection efficiency several times higher than in hemispherical analysers. This can be utilised for example with detection of rare ionisation processes or with low sample densities, both of which suffer from low signal. The instrument is also designed to be used in the FinEstBeaMS beamline (MAX IV Laboratory, Lund, Sweden).

Capable of producing of free, neutral and size varied metal-, semiconductor- and molecular nanoclusters in the size range from few tens to thousands of atoms/cluster. For more information, see here.

Andor SR-500 spectrograph can be used to measure emitted light from de-excitation of atoms and molecules for wavelenghts between 300-1200 nm with < 0.1nm resolution. With the aid of extended fiber optic cables one can do measurements even in industrial/harsh conditions with easily transportable setup.

For producing vapors from solid samples one needs an oven. The group has long traditions in manufacturing and designing different types of ovens for vapor production and currently two types of ovens are used in the experiments:

The existing multistage ovens enable also the dissosiative preparation of multimers and/or single molecules prior to probing their properties. The newly developed simultaneous solid state & vapor phase oven design provides new insight into the calibration of the absolute binding energies in solid state.

In order to create deep core-hole states and to follow their Auger decay and various cascade processes, also charged particles, such as electrons, have been used for primary ionization. The spectra created by electron impact have been recorded with the SES-200 electron energy analyzer in the Oulu laboratory.

Detecting the elastically and inelastically scattered electrons from primary electron beam and recording the energy loss of the electrons can be used as a tool for studying both valence and core excitations of the target. The EELS method can be used as an analogue to the photon absorption experiments or, under certain conditions (large scattering angles, low energy), and for studying dipole- and spin-forbidden transitions. For EELS experiments a special setup has been designed in Oulu, where the Scienta SES-100 analyzer is used in a reversed mode as an electron energy monochromator and the SES-200 as an electron energy analyzer.

Electron optical calculations for further development of the electron spectrometers and ion time-of-flight analyzers are also an important part of research in Oulu.

For studying excited states of atoms and molecules a special laser system was set up in 2003 in collaboration with University of Uppsala to MAX lab (Currently: MAX IV Laboratory, Lund, Sweden). The laser consists of a 532 nm 10.5 W CW Coherent Verdi V10 used to pump a tunable Coherent 899-29 Ti:Sa ring laser producing IR radiation from 690 nm to 1000 nm with three different sets of optics. The laser output power measures more than 1 W directly after the output.

The laser has been used on various kinds of samples in two-color experiments where the target is first excited using the laser radiation and then ionized with synchrotron radiation. Most common targets for such studies in the group have been atomic alkali metal vapors.

The laser setup is currently located in the facilities of Centre of Microscopy and Nanotechnology, University of Oulu.

MAX IV laboratory (formerly MAX-laboratory) is a Swedish national synchrotron radiation facility located in Lund, Sweden. It currently consists of three electron storage rings, MAX I, MAX II and MAX III that produce synchrotron light to be used in experiments of various fields of science such as physics, chemistry, biology, materials science, geology, engineering and medicine. For a video about MAX IV, see the video here.

MAX II is a 3rd generation storage ring operating at 1.5 GeV energy. The ring produces radiation from UV to soft and hard X-ray region. Currently, most of the experiments performed by the group are done on the soft X-ray beamline I411 on MAX II. The newest storage ring in the MAX IV laboratory is the 3rd generation MAX III, commissioned in 2007 and operating at 700 MeV in the VUV region, and it houses also the Finnish-Estonian (FINEST) branchline of the I3 beamline.

The soft X-ray beamline I411has been operational since January 1999. The beamline uses synchrotron radiation emitted by a high brilliance hybrid undulator. The radiation is very intense and strongly collimated. The beamline has been mainly used for gas phase studies, the useful photon energy range being 40-1500 eV.

The essential part of the beamline is the monochromator that selects a discrete wavelength of the synchrotron radiation to be used in the measurements. I411 is equipped with a modified SX-700 plane grating monochromator manufactured by Zeiss. It has two interchangeable gratings with groove densities of 366 and 1221 1/mm. Focusing to the exit slit of the monochromator after the grating is accomplished by a plane elliptical mirror. The final focusing to the sample position is achieved by a toroidal mirror.

A multipurpose system, built in Oulu, can be used on the one meter section as a time of flight ion mass spectrometer, conventional electron spectrometer, threshold electron spectrometer or coincidence spectrometer between ions and electrons with selected kinetic energies. This setup can be rotated around the photon beam thus allowing angle resolved studies and can be operated either alone or simultaneously with the permanent R4000 end-station.

I3 beamline with FINEST branchline

The source of I3 is an APPLE-II type elliptically polarizing undulator (EPU), that emits light whose polarization state can be varied from left- and right-handed circular polarization to various elliptical polarizations as well as to horizontal and vertical linear polarization. The radiation is both highly collimated and bright.

The desired wavelength is chosen by a 6.65 m off-axis Eagle type normal incidence monochromator manufactured by Bestec GmbH. The monochromator is equipped with five grating holders for optimizing the flux and resolution by choice of coating and groove density. Currently three gratings are mounted: a 2400 l/mm Al/MgF2 coated, 4200 l/mm SiC coated and a 4200 l/mm Pt coated. These three gratings cover the photon energy range of 4.6 – 50 eV exceeding a resolving power of 100 000 throughout the photon energy region.

After the monochromator the radiation passes onto a plane mirror used to compensate for the change in beam position when moving the grating. This mirror is also used as a flip mirror to select between the two branches of the beamline: a permanent angle and spin resolved photoelectron spectroscopy end-station for solid state samples and a branchline for gas and vapor phase user experiments. The gas and vapor phase branch, called FINEST, was designed, funded and commissioned by the Finnish-Estonian consortium consisting of the electron spectroscopy group, the materials science group at the University of Turku and the Institute of Physics in Tartu, Estonia, where the Oulu group was in charge of the design and commisioning.

For studying excited states of atoms and molecules a special laser system has been set up in 2003 in collaboration with University of Uppsala, Sweden. The laser consists of a 532 nm 10.5 W CW Coherent Verdi V10 used to pump a tunable Coherent 899-29 Ti:Sa ring laser producing IR radiation from 690 nm to 1000 nm with three different sets of optics. The laser output power measures more than 1 W directly after the output.

The laser has been used on various kinds of samples in two-color experiments where the target is first excited using the laser radiation and then ionized with synchrotron radiation. Most common targets for such studies in the group have been atomic alkali metal vapors.

The laser setup is currently located in the facilities of Centre of Microscopy and Nanotechnology, University of Oulu.

The cluster related research is one of the main research directions of the materials research in nano and molecular systems group. The research aims to characterize the electronic structure of  nanoparticles - information  which is vital for various applications of nanostructures in applied research and applications.  In an international collaboration project the group has developed a so called Exchange Metal Cluster Source (EXMEC). The first scientific results from this collaboration were published in years 2009-2010.

The EXMEC has so far been used to form nanoclusters from various metals, semimetals and ionic molecules. It has also been used as an atmospheric reaction chamber for airborne aerosols. With the aid of Oulu University strategic funding  an upgraded version of the EXMEC source was commissioned (2011-2012). The  new source provides a possibility for constant usage at the laboratory in Oulu as well as in synchrotron radiation sources.  The EXMEC source is widely used in the interdisciplinary collaboration projects inside Oulu University as well as international projects.

Working principle of the EXMEC

Metal clusters in EXMEC are produced in two steps which are depicted below:

Size of the clusters can be changed by modifying the geometry or the temperature of the nozzle, and regulating the pressure of the rare gas stream. Some examples of our groups research, where EXMEC has been used: