The COVID-19 pandemic caused by the SARS-CoV-2 virus has had a major impact on research activities worldwide and even closures of universities, but on the other hand it is scientific research that will likely bring solutions to the problem we are facing. 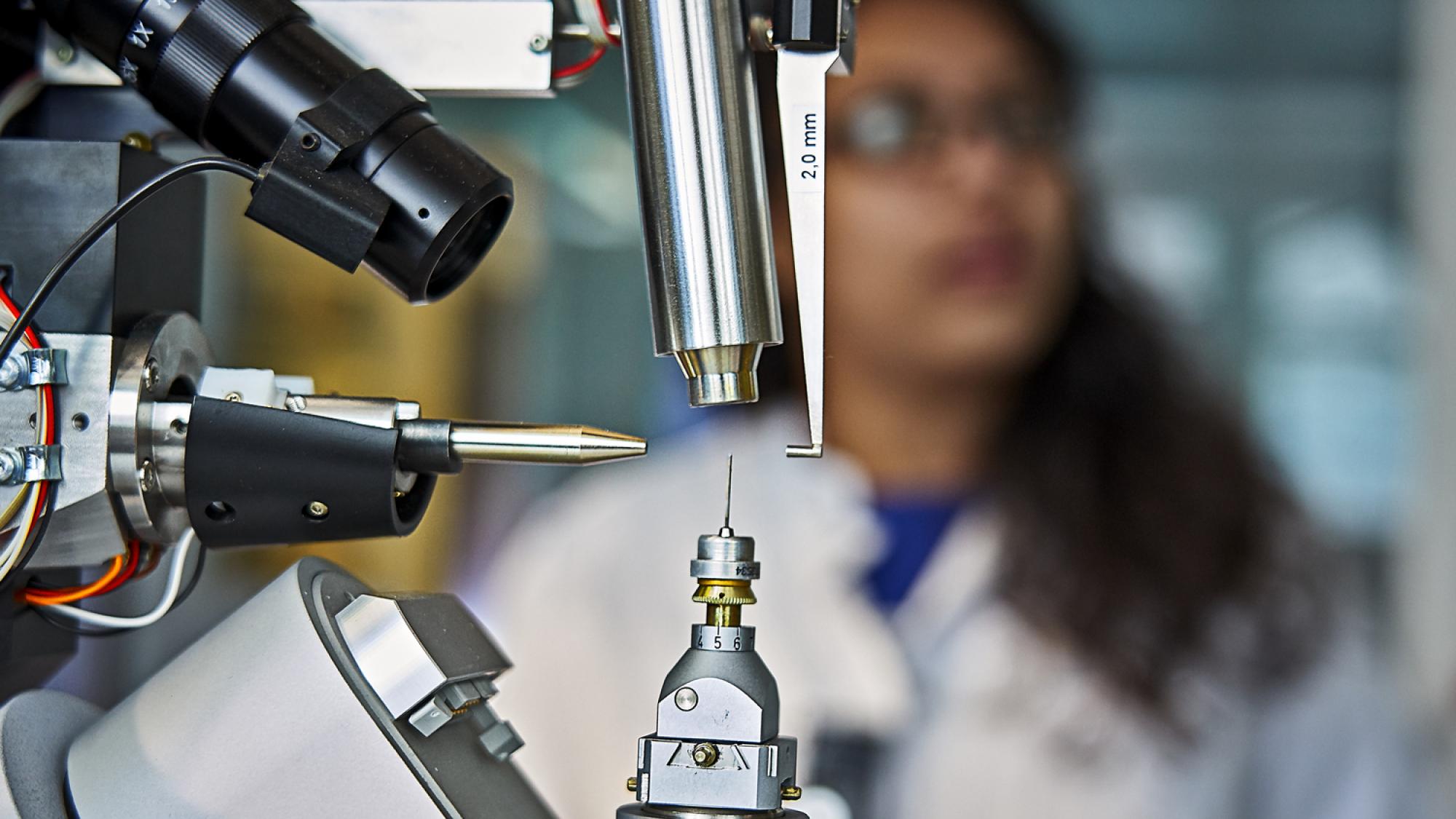 Vaccine development through immunizing humans with virus surface proteins as well as experiments using several already approved drugs (against other infections) to halt viral replication are ongoing both internationally as well as in Finland. The molecular mechanism of virus entry and replication have been studied at a remarkably fast pace and these studies focus on viral proteins and how they interact with the host cells, how the viral proteins are produced, how viral proteins are encoded by the host cell machinery, and how the virus escapes the cellular defense mechanism to allow them to replicate inside the host cell. All these phenomena allow us to potentially interfere with the viral infections and to enable this, there is an apparent need to know the molecular details of the proteins involved and their interactions.

This is where the structural biology communities have put major efforts worldwide and indeed new results have become available at an incredible speed during early 2020. Resources have been targeted explicitly to COVID-19 research. Structural biology methods (info box) together with the development and automation of the experimental procedures during the recent decades have truly paid off.

The two main routes for targeting the virus infection mechanism are host cell attachment leading to virus entry to the cell and multiplication of the virus when it is inside the human cell. 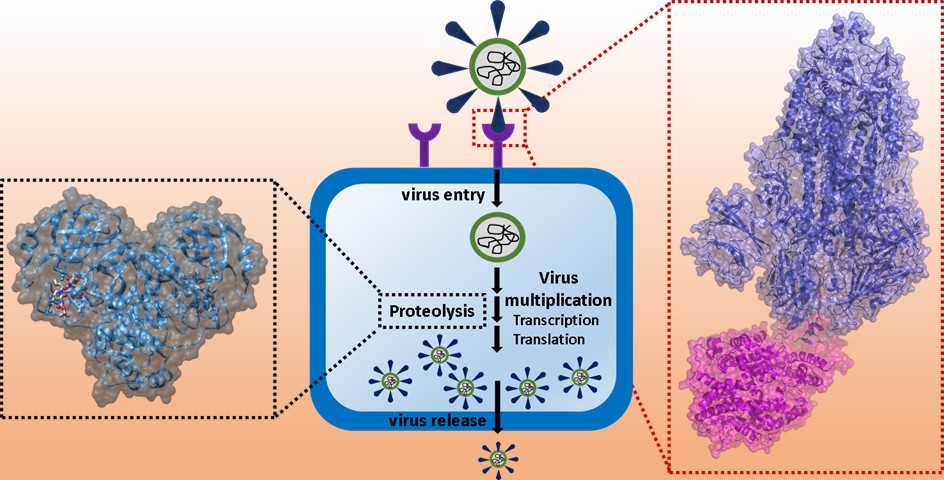 The RNA genome of the corona virus is enclosed by an envelope consisting of a lipid membrane and envelope proteins. At the surface it has spikes, glycoproteins, that allows it to interact with the host cell. Recently scientists used cryo-EM technique to reveal molecular details how the SARS-CoV-2 spike protein interacts with the human cell (Figure). The trimeric spike protein is the key to unlock the entry to human cells and a specific receptor binding part of the virus protein interacts with the receptor protein (angiotensin converting enzyme 2, ACE2) located at the human cell membrane. The SARS-CoV-2 spike protein binds to the receptor at higher affinity than the related viruses, allowing it the efficiently infect the cells. The amount of the receptor varies between individuals and certain drugs may change the levels of the receptor leading to the hypothesis discussed in the media that certain pain killers could make the symptoms more severe.

Scientists have already initiated research to discover drugs which prevent the interaction between viral spike protein and human ACE2 protein. The structures solved allow scientist to design such suitable compound binding to either one of these interacting proteins. The interaction with the virus could be blocked by antibodies, our defense proteins, produced by the body after vaccination or provided as biologic drugs that would neutralize the virus.

Once virus enters human cells it hijacks human protein manufacturing machinery to produce viral proteins including the proteins that work like scissors - viral proteases. The newly synthesized viral polyproteins are chopped by these scissors to produce functional viral proteins, which are required to synthesize and to form the virus parts, viral genome and structural proteins. Production of viral proteins and virus genomes are potentially processes which could be targeted with antiviral drugs. Viral proteins also interfere with the host cell machinery and for example counteract the antiviral protein modification, ADP-ribosylation, which is critical for the survival of the virus and is being studied by the Lehtiö research team. Once the virus parts are assembled, the new mature viruses are formed and released from the cell to infect other cells rapidly. Researchers have used X-ray crystallography technique to determine the 3D structure of the virus main protease allowing now design of compounds, future drugs, that would prevent multiplication of the virus (Figure). The idea is very similar to the first and the classical example of structure-based drug design that led to the treatment of AIDS in the 1990’s through inhibition of the HIV protease.

Structural biologists around the world started taskforce to discover the effective drugs to inhibit the function of this main protease. Thousands of compounds have been screened in high-throughput way in order to identify a molecule, which would bind to the protease so tightly that the scissors would not work, and viral proteins would not be produced. Small compound fragments have also been discovered through X-ray crystallography-based screening and as a joint effort international community has tried together to design combination of these small pieces that could be combined to a functional high affinity future drug molecule. Several inhibitors have been already identified for SARS-CoV-2 main protease and they can indeed stop virus multiplication in human cells and in mice.

Despite that the virus was identified only some months earlier, there are already over 130 structures related to SARS-CoV-2 deposited in Protein Data Bank, which is a database accessible for everyone to look and analyze structures. This is a key resource for biochemists worldwide and allows researchers to utilize the results of the other scientist efficiently in applications exemplified by drug design efforts. Protein Data Bank has created a resource describing all the SARS-CoV-2 structures published and the pages also include educational content on the virus.

Proteopedia aims at combining structural information available and at facilitating the understanding and use of structures in research and in teaching. Proteopedia has preset views on the proteins linked to a text and users can also modify the view of the structures on in the web browsers viewer. Diamond Light Source has collected the SARS-CoV-2 compound fragment structures to a page where they can be viewed and used for designing new more potent compounds.

Instruct-ERIC, a Pan-European research infrastructure in structural biology, has directed resources especially for COVID-19 studies. The Instruct Centre Finland with a research site at Biocenter Oulu was establish during the last year and started operating in 2020. COVID-19 resources available through Instruct-ERIC are available in a web site launched last week.

These examples demonstrate the efforts throughout the world to develop common understanding of the virus in molecular level detail and to use that information to find new solutions to the problem we are facing.

Structural biology has provided molecular details of the proteins and their interaction and it has enabled structure-based design of new drugs. Developing the compounds from a basic concept into a safe drug is a long, tedious and expensive process and should not be rushed despite the situation. Careful and controlled experiments and clinical studies must be conducted, and the drug needs to be naturally approved by authorities.

Potential routes for a fast track are in using already known and approved drugs or naturally approved compounds we consume already in food for treatment as they have already been proven to be safe at least to some extent. This fast track route requires a lot of luck and the drugs may not be as effective as a compound specifically tailored to interfere with SARS-CoV-2 proteins. To our knowledge the treatments developed for other viruses have not been effective due to differences in the viral proteins. Early 2020 and efforts by the structural biology community have shown the power of academic research in early drug discovery, where it can at a fast pace inspire new treatment possibilities, help facilitate design of new drugs and to test and to validate proteins as potential treatment targets.

X-ray crystallography is a method in which the protein crystals were shoot with X-rays and the diffraction is captured by a detector. The X-ray diffraction pattern is used to calculate the electron density map of the protein atoms and thus 3D model of the protein can be modelled. This technique is used since mid 19th century to determine the 3D structure of proteins/ macromolecules.

Cryo-EM method pictures of single protein particles taken through shadows in a shower of electrons at cryogenic temperature and the 3D model of the protein can be reconstructed by averaging thousands to millions of the protein particles. This technique is used since 1980s but got popularized in 2010s. Further details on the methods used here.