Potentiality of solar energy in the Arctic

Geographically, the Arctic is a region extending around the North Pole. Its southern border, however, is defined based on several viewpoints including temperature, vegetation, culture, and politics. Regardless of its definition, the Arctic region is characterized by extreme weather and climatic conditions, from polar nights to the midnight sun, from extensive periods of white snow cover to vast green areas. Mapping potential renewable energy production and supply in a region subjected to this wide heterogeneity is a challenge. 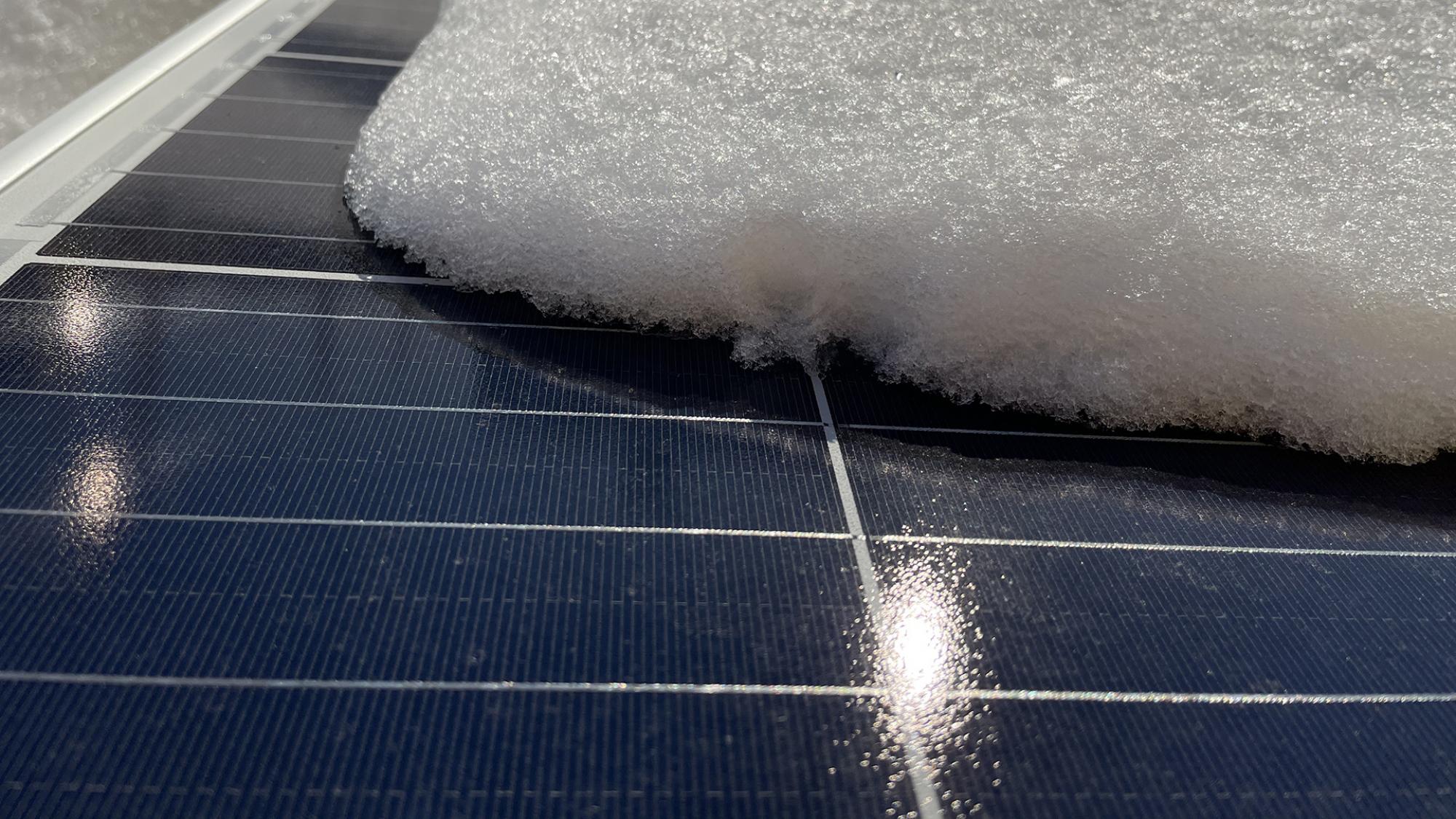 Solar energy production feasibility and its potential future in the Arctic regions is a topic characterized by a few common uncertainties. The work done at the University of Oulu addresses some of these, like how to improve efficiency in climates defined by extreme seasonal variation and to properly account for the role of snow and ice in the limitation and enhancement of solar photovoltaic systems performance.

According to Statistics Finland (Tilastokeskus), Finland’s total electricity production in 2020 was 66 TWh. The share of renewable energy sources supporting this production increased from 47% in 2019 to 51% in 2020. Much of the renewable energy was generated by hydropower (23,6%) followed by biomass (15,2%) and wind power (12,1%). The share of solar power doubled from 0,2% to 0,4% in 2020. It is worth noting that the volume of solar power is seen at its highest in many years, even though its share remains comparatively small. By 2030, the share of solar power in the renewable energy mix in Finland can increase up to 3% with strategic planning and implementation. According to the Finnish Energy Authority (Energiavirasto), this increasing solar energy production is primarily supported by small-scale production.

Arctic conditions pose challenges besides also providing satisfactorily beneficial conditions for solar energy production. It is crucial to exploit these conditions to enhance solar production in extreme weather conditions. Reflection cast from the snow also termed “ALBEDO” and colder temperatures are said to improve solar energy production with the latter, increasing the efficiency of solar panels compared to hotter conditions. Theoretically, the best solar energy output is gained if the panel angle is changed according to season. For instance, having steeper panel angles during winter and flatter angles during summer. Currently, the University of Oulu’s solar research infrastructure is being utilized for gathering these necessary data on solar irradiance, snow conditions, solar panels, and their operation.

Seasons in Finland are distinguished using a thermal criterion. The mean temperature in winter remains below 0°C. Winter witness high snowfall, sub-zero temperatures, and shorter daylight periods. During this season, roof-top solar panels are inefficient due to the accumulation of snow and susceptible to damages due to different snow clearing methods. Snow on the solar panels implies less/zero energy production. Using bifacial solar panels during this season can uplift the efficiency of the system. Wall-mounted solar panels can be an ideal solution during the winter and the spring. However, based on the recent observations from the University of Oulu’s research infrastructure, following the melting of snow in Spring, roof-top solar panels with angles of inclination varying from 25° to 45° produced 22,54% more solar energy than the wall-mounted solar panels.

The mean daily temperature in spring is between 0°C to 10°C. The transition from shorter daylights to longer daylights, cloudless skies and intermittent snowfall increases the potentiality of solar production during this season. The albedo from the snow further increases solar production. However, on the contrary, during this season, aluminium frames are prone to subside due to the accumulation of wet snow. Frameless solar panels or building-integrated panels which cover both roofs and facades should have more advantages in this scenario.

In autumn, the daily mean temperature remains below 10°C. High cloud cover and precipitation are observed during this season which reduces solar production. The formation of the frost layer due to the freezing of water can also make the solar panels vulnerable. Recent observations from the research infrastructure also showed frequent meteorological episodes of cloud cover, storms, fog, and high precipitation levels in autumn, resulting in lower solar production. 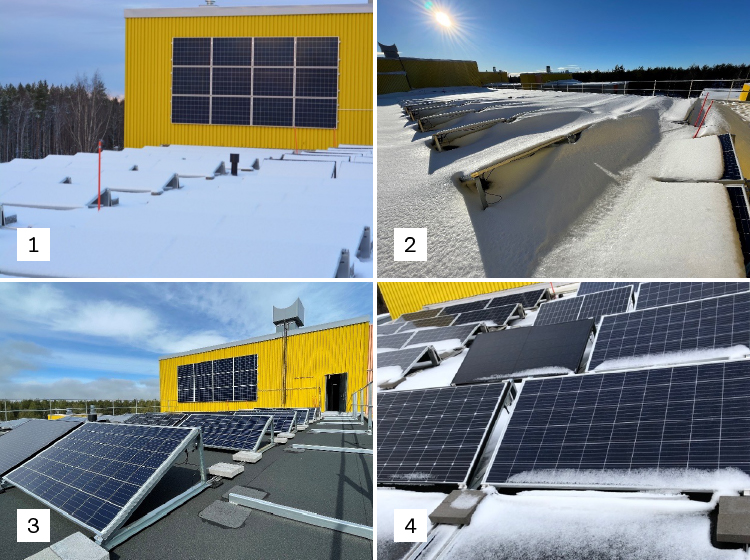 From an economic perspective, in recent years, prices of solar power systems have seen a downward trend and solar electricity production has seen an upward trend especially supported by small-scale production in Finland. According to the National Survey Report of PV Power Applications in Finland, the typical turnkey PV system prices in 2019 for residential buildings applied photovoltaic systems of sizes 5-10 kW cost, 5 €/W and Small centralized PV system of sizes 10-20 MW cost, 0,5 €/W. Hence, installing solar panels in Finland proves to be a profitable investment currently, and in the future. A customer can deduct the share of installation work on their solar power package from their taxes. In 2021, it is possible to receive a tax credit for domestic costs up to the value of €2,250 per person in Finland. According to the European Technology & Innovation Platform (ETIP) PV report, the estimated typical Energy Return on Investment (ERoI) in regions like Finland with moderate irradiation is said to be between 7 to 25 and Energy Payback Time (EPBT) to be between 1 to 4 years. Additionally, electricity companies compensate the producers with their surplus electricity which is fed back to the grid after the self-consumption. The new amendment to the Government Decree will further allow hourly netting of small-scale production and consumption. Nearly 60 companies are operating in the field of solar energy especially on the design and installation of solar panels in Finland. From a broader economic point of view, these companies help in creating jobs and strengthening the regional economy.

Impact of changing consumption profiles in the future

In addition, solar energy being an intermittent and irregular form of energy, it is crucial to quantify its role both quantitatively and qualitatively concerning location, consumption patterns, the position of the solar panels and seasons. The average temperature of the arctic region is increasing due to climate change. Consequently, an increase in the frequency of these extreme weather events is resulting in increased electricity demand for air-conditioning, ventilation, and humidity control in addition to cooling. The consequence will be higher mid-day consumption peaks, resulting in higher electricity costs. Building incorporated photovoltaics can harness local energy and provide electricity for ventilation and achieve comfortable indoor conditions. Increased solar energy production will hence reduce the need to buy energy from the market at peak electricity price conditions. On that account, solar energy will play an important role in promoting zero-energy buildings. Residential, public, and commercial buildings with peak consumption during the day can best benefit from peak solar energy generation.

The blog post is part of a series of blogs relating to multidisciplinary Arctic research at the University of Oulu. The next writer is doctoral researcher and Sámi museum Siida project manager Eeva-Kristiina Harlin.

Vinay Shekar is a researcher at the Water, Energy & Environmental Engineering research unit. He has an environmental engineering background, and he is specializing in Energy systems engineering. His PhD topic is about the energy, and cost-efficient production of solar energy, under arctic environmental conditions. He has been a part of multiple projects at the University of Oulu like Arctic Preparedness Platform for Oil Spill and other Environmental Accidents (APP4SEA), Modern villages - Sinnit kylät and Energy as a Service Laboratory (EaaSLab).