The Hat and the Sword

The hat and sword are the insignia of a doctor at the University of Oulu. 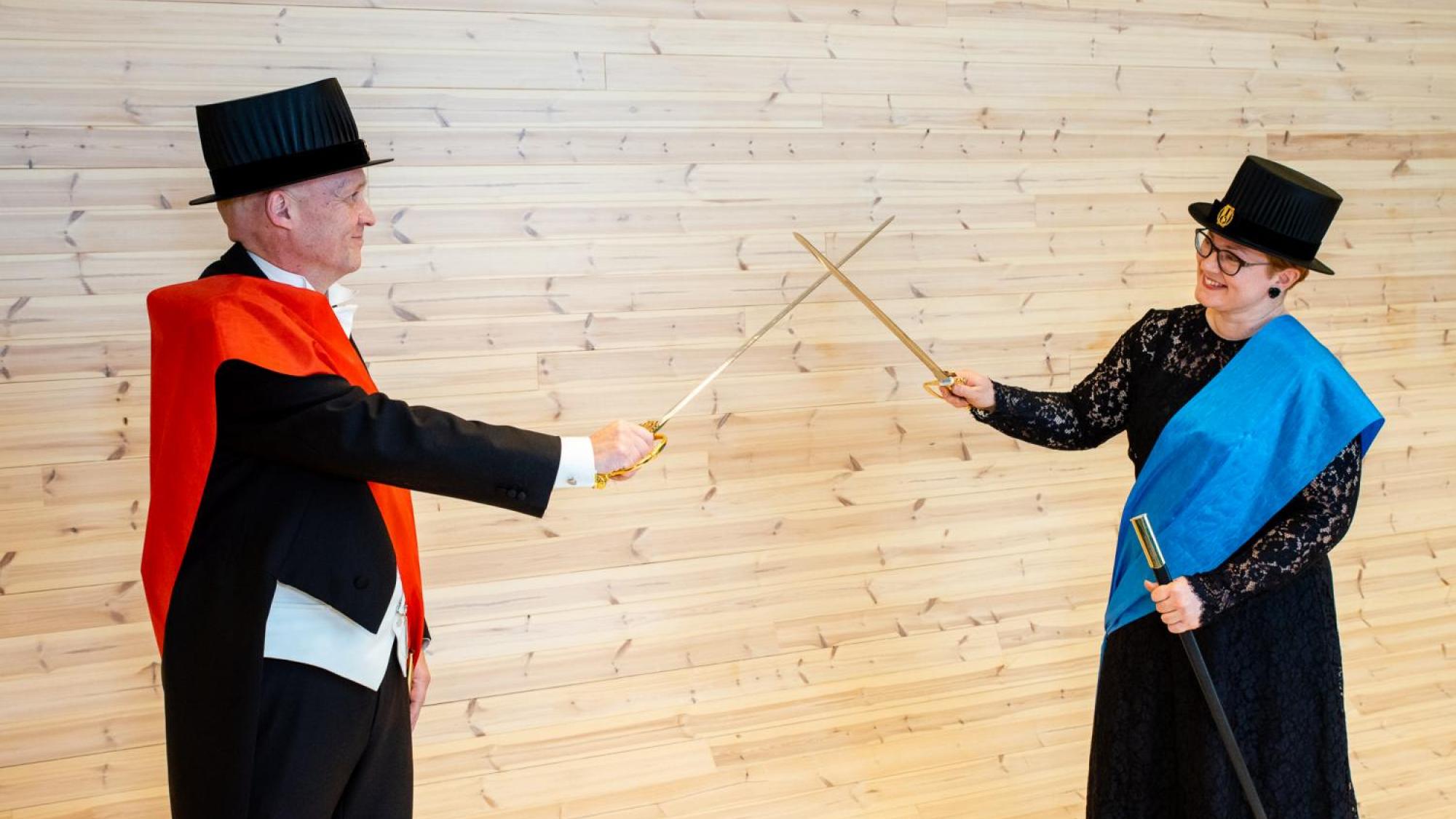 The doctor's hat is a symbol of liberty. Furthermore, it is a symbol of scholarship and freedom of research. The hat is round, because its wearer is supposed to answer questions clearly and naturally and not to split hairs.

A Young Doctor needs to order his/her hat by him/herself. It is recommendable to place hat orders as soon as possible. There is a record number of Doctoral Conferment Ceremonies in spring 2022. Hence it is possible, that the hat manufacturers run out of production capacity in spring.

The hat shops are mainly located in Helsinki. The measurements for the hat can be taken beforehand. Thus, the actual hat orders can be confirmed after making decision considering participation to the Conferment Ceremony.

More information about the hats can be asked from your faculty's representatives of the Young Doctors.

The Hat and the Emblem

The exact appearance of the doctor's hat and emblem may vary according to university and discipline. When ordering your hat and emblem please give the hat maker exact details about your degree and your university.

Here follows a table of the hats and emblems used at the University of Oulu.

Purchasing of the Hat

Most of the hat stores are able to take measurements for the hat on request also in Oulu.

You can also borrow a doctor’s hat from a colleague for the ceremonies. Please ensure that the color of the hat and the emblem match the regulations for your field of science at the University of Oulu and that it is in excellent condition and the right size.

The Doctor's Sword is a symbol for the scientist's fight for what he or she, in rigorous research, has found to be good, right and true.

In Finland, the only sort of sword allowed in Conferment Ceremonies is the officially certified civilian sword of the independent republic of Finland. It comes with a black or golden clip and a scabbard with a golden University Emblem.

Both male and female doctors are required to carry a sword in the Conferment Ceremony of the University of Oulu. The sword is worn on the left side; men wear the sword in a clip, for which a sturdy loop needs to be sown in the trousers. The sword is held firmly in place by a clasp in the scabbard. Women have to carry the sword in a manner suitable for their outfit because the material of the evening gowns cannot support the scabbard. If a female doctor does not want to carry the sword attached to their outfit, it can be carried in hand. A Young Doctor needs to order his/her sword by him/herself

Previously conferred doctors do not carry their swords in this ceremony. Swords are only carried by Young Doctors, Honorary Doctors, Conferrers of Degrees, Master of Ceremonies and Chief Herald.

Purchasing of the Sword

Swords are also sold by these jeweler's shops:

It is also possible to borrow a sword; military swords are not allowed.

The Transportation of the Sword in an Airplane

Swords and other sharp-edged weapons are transported in the cargo hold as registered luggage. The sword should be packed properly, preferably in their own transport box or package. The sword has to be reported in the check-in and it will go on record. These procedures belong to normal airport routines, and there is no surcharge on Finnair flights for the transportation of a sword or other special luggage unless the weight limit is exceeded. More information is available at the check-in of the Helsinki-Vantaa airport.

For more information about doctor's hats and swords, please contact the representative of promovendi at your faculty.