Bees have been trained to roll a ball to a goal matching its colour, as part of research seeking to gain a better understanding of the ability of insects to learn and reason. 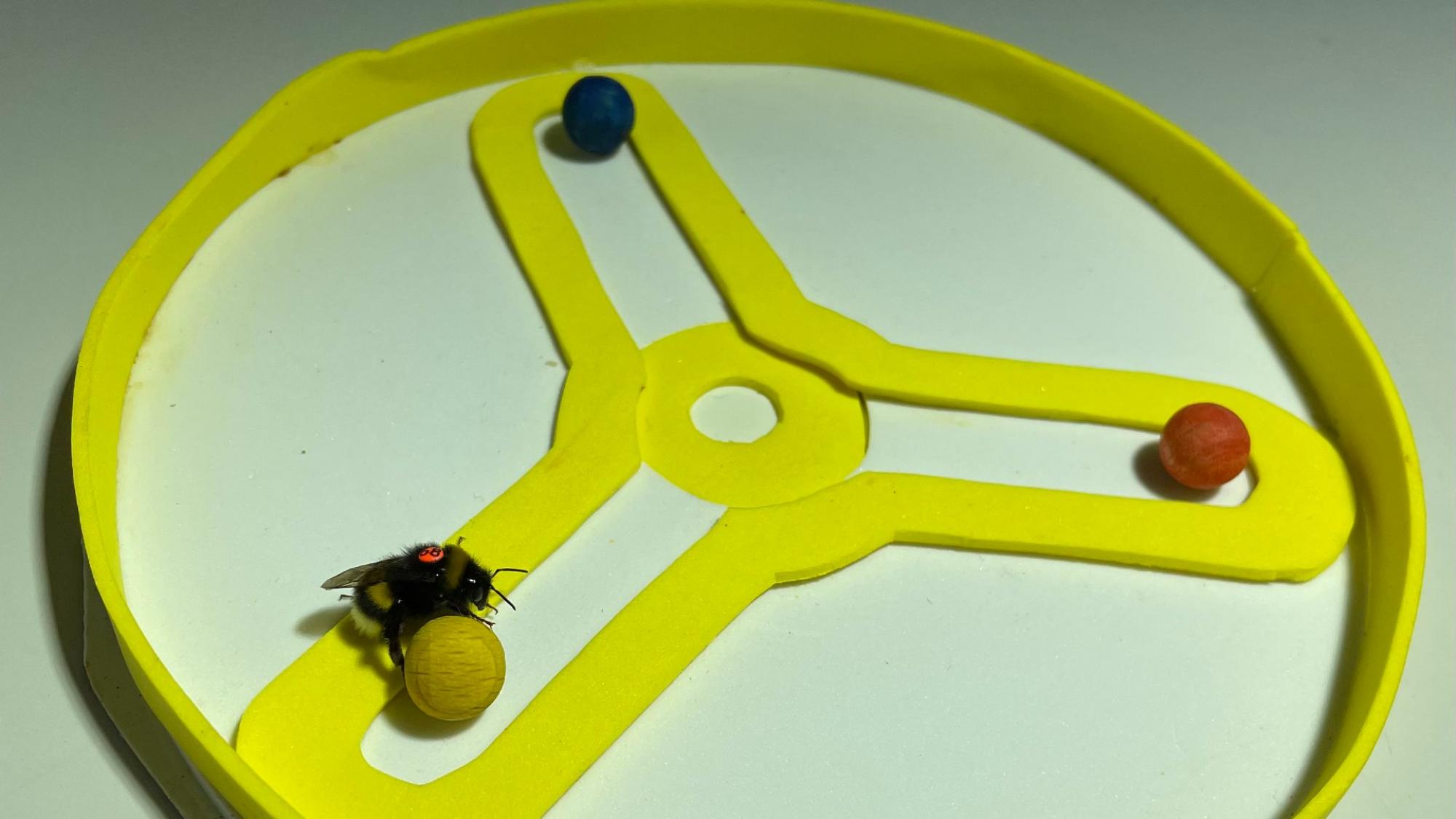 In the transfer test, the bumblebee chooses the correct colour ball for the playing surface. Image Olli Loukola.

Through ball-rolling tasks, Dr Pizza Chow, from the University of Chester’s (UK) School of Psychology, and experts from the Ecology and genetics research unit at the University of Oulu, have highlighted that the right choice of stimuli is paramount, to discover more about the extent to which invertebrates possess aspects of ‘higher’ cognition. These aspects include tool selection, concept learning and causal reasoning, that are comparable to those of humans.

With the footballing skills of the human species in focus for the World Cup, the research on buff-tailed bumblebees (Bombus terrestris) in the ball-rolling tool selection tasks has been published in the international journal, iScience.

The bees’ performance was assessed on a platform including three lanes, with the lanes being connected at a central point - ‘the goal’ - and a bordering wall.

Balls of different colours were placed at each end of a different lane. To successfully complete the training, the bee needed to select the ball that matched the platform’s colour and move it to the goal, to be rewarded with a sucrose solution using a syringe. If the bee did not successfully perform the task, a model bumblebee was used to demonstrate how to obtain the reward.

The bees could choose to freely access the area where the task was set up, via a transparent corridor, from their nest box, while also regularly being provided with pollen during the study.

The research found that the colours chosen in the tasks affected the performance of the bees. Therefore, while historically, it has been thought that a small brain and short life limit cognitive abilities, and more recent studies have shown that invertebrates, such as bees, exhibit remarkable performance in some cognitive tasks, the new research has shown that the views of invertebrate cognition to date may have been biased by the choice of stimuli.

These colours are within the perceptual range of bumblebees’ trichromatic colour vision system. However, as perceived by the human eye, blue has been shown to be the innate preferred colour of most bumblebee populations and red, as perceived by the human eye, appears as dark shades to bees and thus is a more difficult colour for them to perceive. Yellow can be well-perceived and bees are likely to perceive orange/red as dark shades.

Dr Chow, the lead author, whose research focus is the evolution of cognition, said: “Our findings affect our practice in doing good science: we should diversify stimuli that we use in experiments, if we want to draw robust conclusions when studying animal cognition.

“It is important to increase our understanding of insects’ behaviour and minds so that we can help them in terms of conservation and more. In this case, it is bees because their populations have significantly decreased in recent years.”

Associate Professor Olli Loukola, the project leader, from the Ecology and genetics research unit, University of Oulu, said: “It’s surprising how complex rules the bumblebees learn in the ball-rolling task. Even more amazing is how much the differences in training affect their performance in the generalisation task.”

Explaining more about this area of research, he continued: “Determining the cognitive capabilities of insects and what factors contribute to their differences is vital for understanding our own intelligence, how cognition has evolved, and how we approach policies and activities that influence one of the most diverse and abundant groups of animals on the planet.”

At the University of Oulu, bumblebees are actively studied and recent discoveries include: