Traffic to the city campus and shops can be arranged through the existing streets. According to the plan, the construction can be carried out as separate projects independently of each other, and the stores can be built faster if necessary. 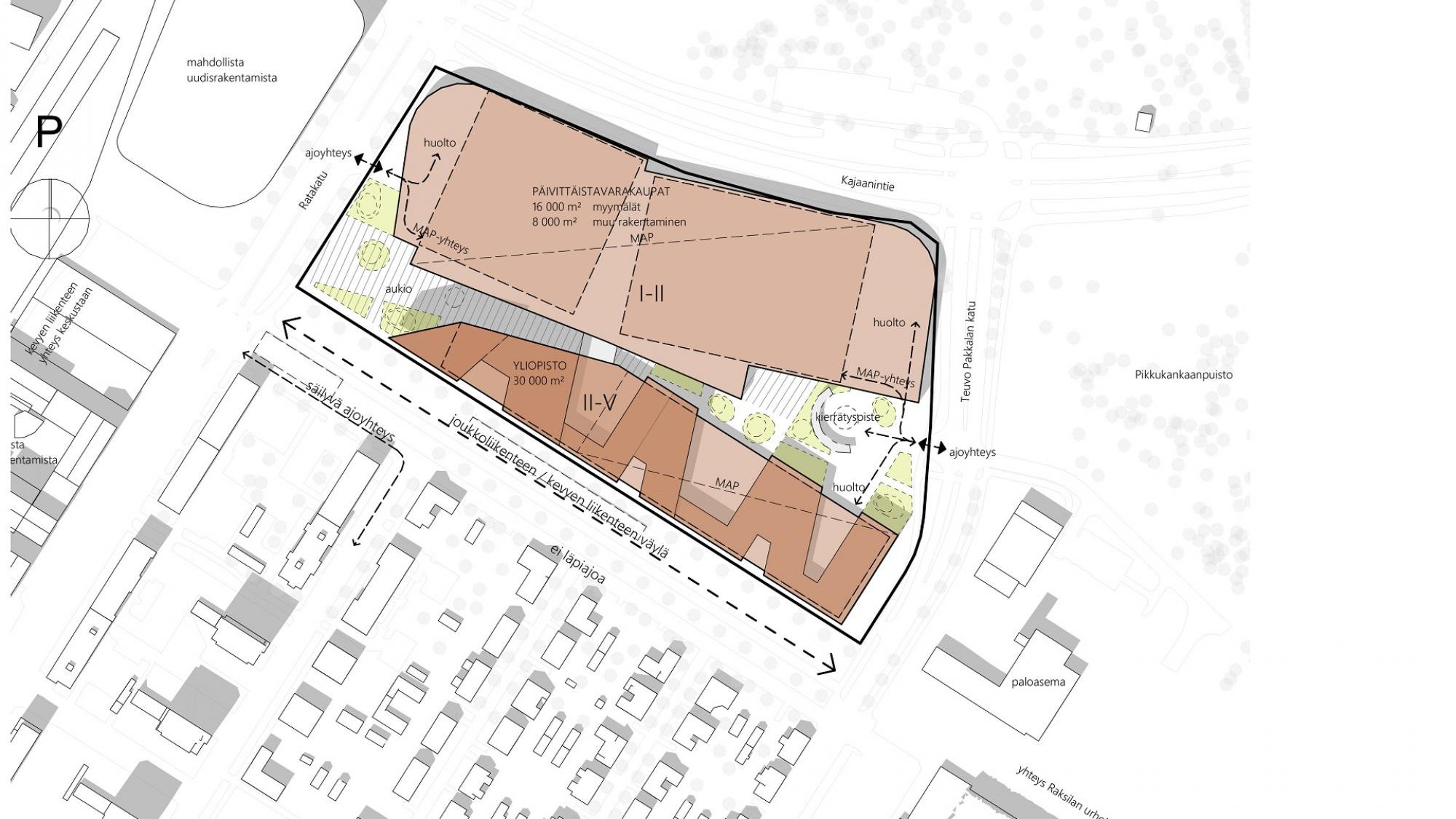 The University of Oulu, Osuuskauppa Arina and Kesko have presented to the City of Oulu a planning reservation report on the Raksila supermarket area. The report examines land use, the placement of functions on the plot and traffic planning. The end result of the survey is that the university building, shop buildings and parking can be accommodated on the plot and there is no need for the city to make traffic investments in Raksila. The area can be developed in accordance with the city’s vision for the city centre as well as the regional land use plan and local master plan.

Traffic can be arranged through Ratakatu and Teuvo Pakkalan katu from two directions to the underground parking garage. For the traffic to the shops and the city campus, approximately 900 parking spaces and high-quality bicycle parking will be built to be used jointly by the operators. The busiest hours of the campus and shops are at different times. In the future, Tehtaankatu can be developed as a boulevard-like quality corridor for sustainable mobility.

The objectives set by Community and Environmental Services have included efficient land use, a high-quality urban environment and cityscape and the adaptation of functions to the built environment, land use projects in the area and the transport network. City planning has guided the planning work on the basis of the planning reservation decision by means of alternative analysis.

In addition to the same goals, important starting points for the university include the impact on the cityscape, the distinctive main entrance towards the city centre and the connection to the Kontinkangas campus. From the point of view of commerce, the most important things are one-storey shop spaces, accessible entrances, functional logistics and sufficient parking spaces.

Both the university and operators in the commerce sector emphasise sustainable solutions in the properties, measures to support low-carbon transport and the overall profitability of construction projects. With the space arrangements enabled by the city campus, the university’s rent costs would decrease in the coming years.

“We are very pleased that effective solutions were found in the joint planning work. In our opinion, the plan works perfectly with the objectives of Oulu’s urban strategy and vision for the city centre. The campus will become a space for the whole university and city residents for encounters, collaboration, congresses and events to increase the attractiveness of the university city of Oulu in the coming decades. At the same time, we are also planning future facility solutions in Linnanmaa,” says Jouko Niinimäki, Rector of the University of Oulu.

“We found a high-quality common vision for the development of a traditional and popular commercial location. We want to continue to offer our customers an affordable food basket also in Raksila. Hopefully, planning will proceed quickly and enable rapid service renewal,” says Veli-Matti Puutio, CEO of Osuuskauppa Arina.

“K-Citymarket Raksila is such a traditional and important location for Kesko and the customers of the store that it is essential for us to continue K-Citymarket’s operations in the new business premises in due course. In agreement with Arina and the university, we have arrived at a model that works for all three operators in the design of the market area, on the basis of which it is good to continue planning further,” says Jari Saarinen, District Director of Kesko in Northern Finland.

“The planning of the Raksila plot has progressed in good cooperation between the University of Oulu, Osuuskauppa Arina, Kesko and the city. Raksila is one of the most important plots for urban development, so it is clear that its planning is of interest to the residents of Oulu. At the same time, the city is significantly developing and planning the Linnanmaa region as well. The planning reservation of the university, Arina and Kesko is valid until the end of 2021. The City Council will decide on the town planning of the plot after the reservation ends and the final plans and necessary agreements have been made,” says Päivi Laajala, Mayor of Oulu.

The next step in the planning should be to agree on the use of the plot and the financial terms and conditions between the City of Oulu, Arina, Kesko and the university. The start of construction projects requires a change of town plan and its entry into force.

The university city campus is a very important construction site at the national level, and the aim is to organise an architectural competition on its design. Campus project planning is scheduled to be completed during the planning reservation by the end of 2021. After this, town planning can be started. At the same time, future facility solutions for the university in Linnanmaa are being planned. The aim is to concentrate the premises that remain at the university’s disposal around the core area of the Linnanmaa campus.

The planning reservation survey was carried out by design company WSP Finland Oy, Linja arkkitehdit Oy and traffic planning company Plaana Oy in cooperation with the university, Arina and Kesko. Planning was carried out in cooperation with the city’s Community and Environmental Services. The working groups also included representatives from University Properties of Finland Ltd and different faculties of the university.

As part of the planning reservation survey, Pohjois-Suomen Opiskelija-asuntosäätiö PSOAS assessed the impact of the city campus on student housing. To address demand, PSOAS plans to build more housing near the centre of Oulu for about a thousand students. The new construction will replace older PSOAS building stock.

The university’s aim is to build a campus of about 30,000 floor m² in Raksila in the centre of Oulu at the end of this decade. Designed to be used by the entire university, especially students, approximately 20,000 m² of the campus facilities will be flexible teaching and study spaces as well as event and meeting facilities for future needs. There will be approximately 10,000 m² of staff office space on the city campus.

Thanks to its excellent accessibility, traffic to the city campus will mainly be by pedestrian and bicycle traffic and public transport, but a total of approximately 900 parking spaces will also be built in the area for the university, Arina and Kesko. The possibilities to use the campus as a venue for events, meetings and congresses will be greatly expanded when it is a walking distance away from the hotels of the city centre. The city campus and Kontinkangas campus will enable the development of surrounding areas such as Välkkylä and the Raksila sports park in a new way in the future.

With digitalisation, studies and work are increasingly carried out in self-selected places. The university’s overall need for space will be reduced and will focus on versatile, modifiable facilities. In addition, the university has a need to manage facility costs, improve the energy efficiency of its premises and reduce the carbon footprint of its operations. With the facility arrangements enabled by the city campus, the university’s rent costs will decrease in the coming years, leaving more money for teaching and research.

The university’s future needs for facilities, the city campus and facility solutions in Linnanmaa are being planned together with students, staff and stakeholders in working groups representing the different user groups. The functions transferred from Linnanmaa to the city campus will be decided upon as project planning progresses. The starting point of planning is that staff or students will not need to move between campuses on a large scale during the day.

Picture: In the primary planning option, the city center campus would be located as a separate building on Tehtaankatu. The main entrance would open towards the city center and the railway station. Tehtaankatu street would be developed as a boulevard-like corridor for sustainable traffic. Picture: Linja arkkitehdit