The University of Oulu has become one of the most important hydrogen research centres in Finland. 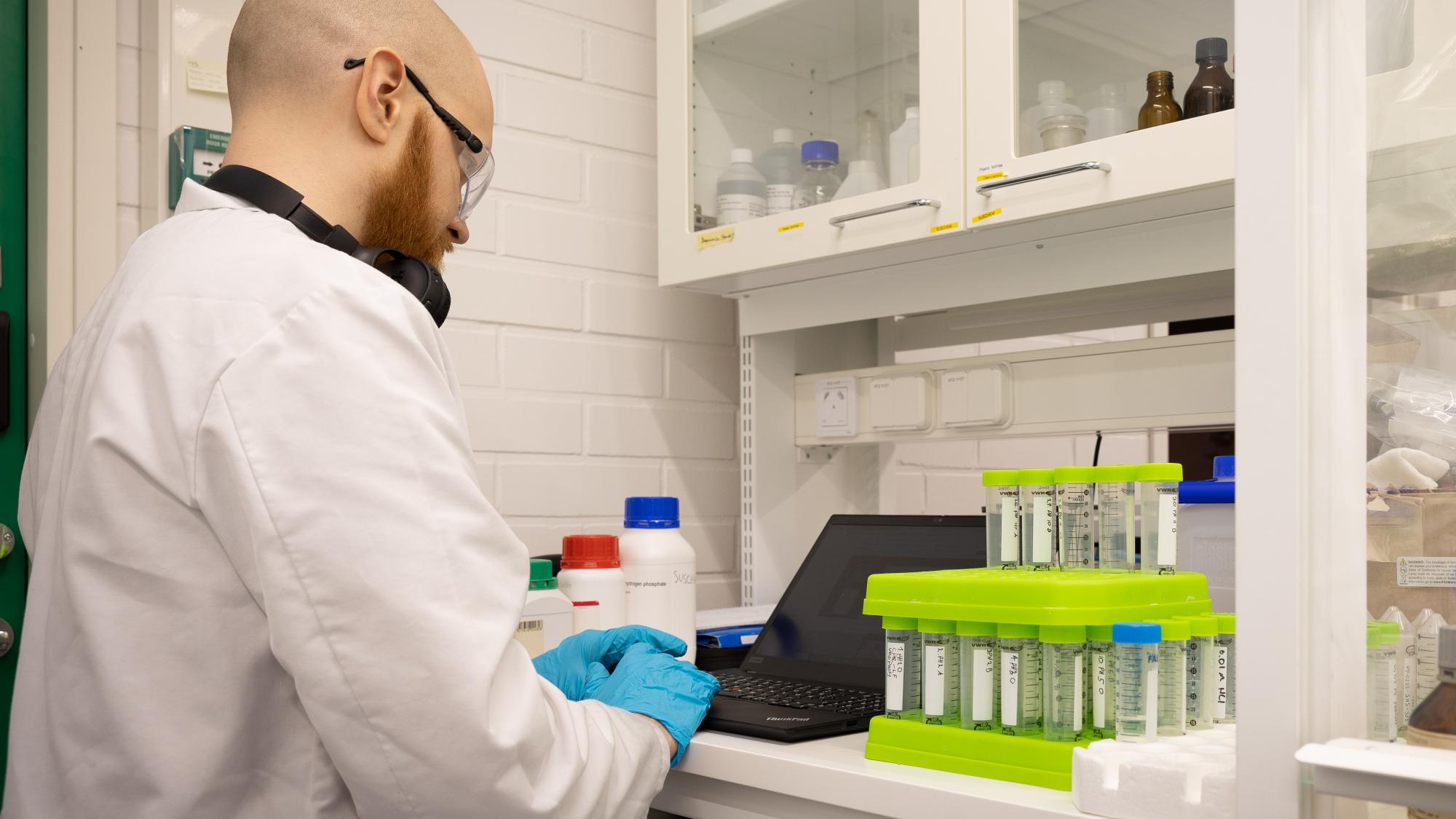 Lab technician Juhani Väisänen conducting research at the laboratory of the University of Oulu Faculty of Technology. Image: Tero Suutari/BusinessOulu.

Text by Visa Noronen. Originally published on the BotH2nia network website 3.6.2022. Researchers at the University of Oulu presented the results of their hydrogen research on May 2022 at the BotH2nia Goes Oulu event.

The enormous demand for electricity is one of the worst bottlenecks in increasing hydrogen production. To overcome this problem, the University of Oulu is also studying less well known ways of producing hydrogen.

Led by Professor Marko Huttula, researchers are studying photocatalysis, which uses sunlight - without electricity - to produce hydrogen from water. A catalyst that accelerates the chemical reaction collects energy directly from the light and uses it to break down water molecules. The end result is pure hydrogen and oxygen.

The principle has been known for 50 years. Since sunlight is not first converted into electricity for electrolysis, Huttula says it can provide the cheapest, most efficient way of producing hydrogen.

"I believe that we will see pilot plants this decade," says Huttula.

"Hydrogen production is the biggest obstacle to the use of hydrogen in transport. A suitable technology for using hydrogen for transportation purposes already exists,” points out Professor Juho Könnö.

"The use of hydrogen doesn’t necessarily reduce transport emissions,” states Könnö. "If hydrogen is produced with fossil energy, the total CO2 emissions of a hydrogen-powered car may reach almost the same level as new diesel cars."

Using products refined from hydrogen, it will be possible to utilise hydrogen in fuels without requiring significant investments in the distribution infrastructure.

"The Biogas to fossil-free biohydrogen and clean energy (GREENE) project develops and builds continuous pilot-scale equipment for hydrogen production," said Professor Riitta Keiski, who works as an expert on the project.

The carbon monoxide produced in connection with hydrogen production is utilised in the project as an energy source for the process.

Key University of Oulu research areas also cover the research of steel production. Professor Timo Fabritius emphasises that there are several hydrogen technologies already in use for reducing emissions from steel manufacturing. In addition to the manufacturing methods to be introduced first, hydrogen plasma technology and microwave-assisted hydrogen reduction, among others, are being developed for steel production.

The average annual consumption of steel per capita in industrialised countries is approximately 300 kg and in developing countries 200 kg. 85% of the metals we consume are steel. This is why the development of steel grades can significantly reduce harmful emissions into the environment. Whenever the weight of a car is reduced by 100 kg, the carbon dioxide emissions of conventional combustion engine cars are also reduced by approximately 6 grams per kilometre driven.

The development of steel grades is natural, as there are already 70,000 different steel grades available commercially.

The development of hydrogen technologies alone is not enough to reduce greenhouse gas emissions in steel production - or elsewhere - through the use of hydrogen.

"In addition to technologies, we must also have business models suitable for utilising them," says researcher Marika Iivari from the Oulu Business School of the University of Oulu. She calls for a focus on business design, by which Iivari means future-oriented, next-generation business development.