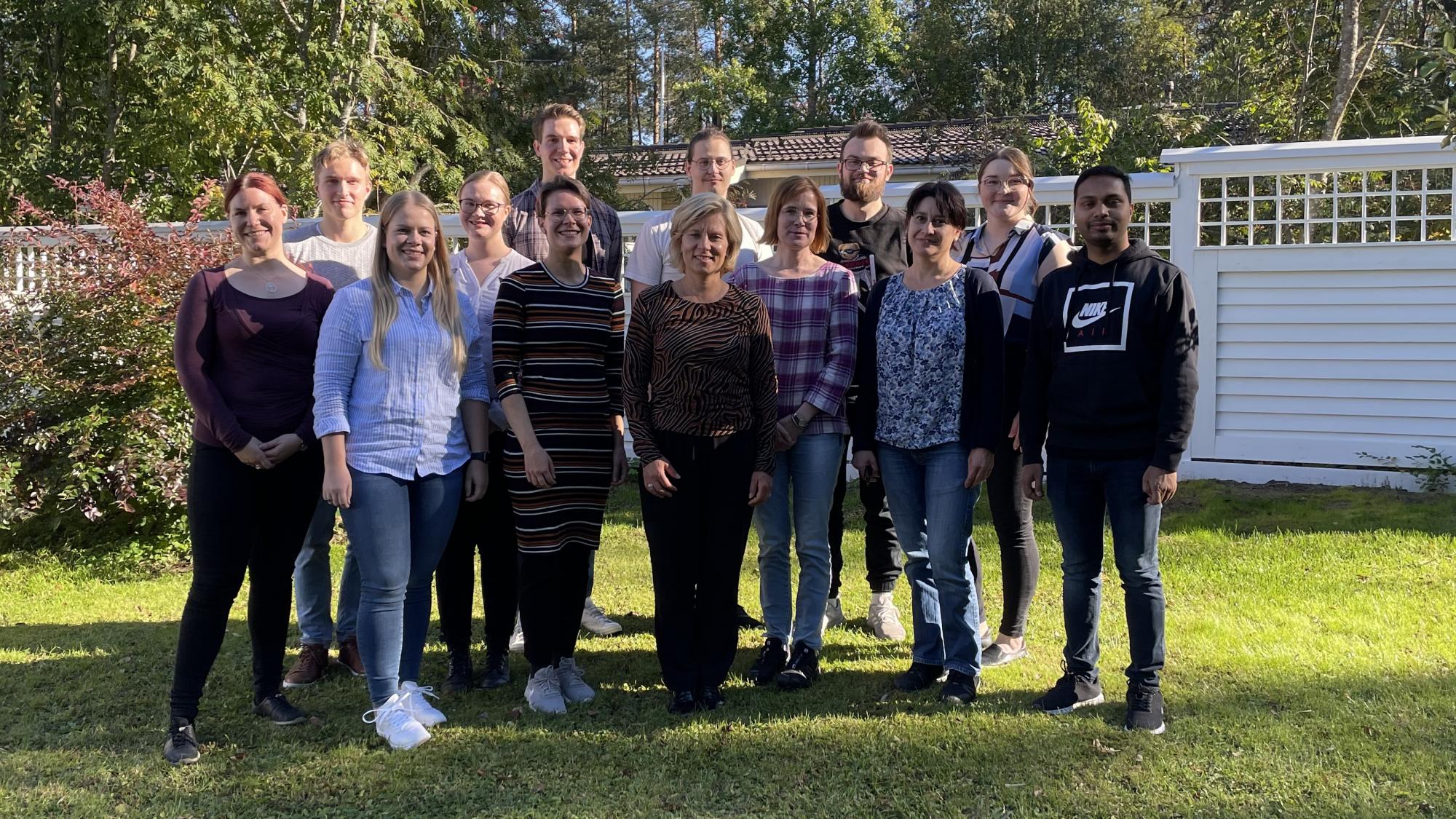 ECM and Hypoxia
Faculty of Biochemistry and Molecular Medicine

2-oxoglutarate-dependent dioxygenases (2OGDDs) are an enzyme family of ~60 members in human that share the same reaction mechanism but act on different substrate varying from proteins to DNA, RNA and fatty acids. 2OGDDs require as cofactors Fe2+, 2-oxoglutarate (2OG) and O2. 2OGDDs include the collagen prolyl 4-hydroxylases (C-P4Hs), the hypoxia-inducible factor prolyl 4-hydroxylases (HIF-P4Hs / PHDs / EglNs), transmembrane P4H (P4H-TM) and the hypoxia-inducible factor (HIF) asparaginyl hydroxylase FIH. Many 2OGDDs act on chormatin structure as erasors, such as the DNA demethylating TETs and numerous histone lysine demethylases (KDMs). 2OGDDs can be targeted with small molecule compounds, such as the HIF-P4H inhibitors that have been accepted for the treatment of anemia. We hypothesize that these inhibitors can  be used to treat ischemic, metabolic and inflammatory conditions. We also anticipate that other 2OGDDs can be targeted with small molecule inhibitors to for example to treat cancer.

Oxygen homeostasis is essential for normal development and physiology, and many pathological processes are associated with hypoxia. The rescue response of cells to hypoxia is chiefly mediated by the hypoxia-inducible factor (HIF), which can initiate the transcription of ~300 genes involved in hematopoiesis and iron metabolism, angiogenesis, glucose and lipid metabolism, inflammation and tumorigenesis. Activation of the hypoxia response pathway aims to i) increase oxygen delivery to tissues and ii) decrease its usage e.g. in oxidative metabolism. The same physiologic pathway is activated at high altitude, which is exploited by endurance athletes. HIF is an αβ dimer. The HIFα subunit isoforms HIF1α and HIF2α are synthesized constitutively, and hydroxylation of two proline residues by the HIF prolyl 4-hydroxylases (HIF-P4Hs) targets them for proteasomal degradation via the von Hippel Lindau protein (VHL) in normoxia. Under hypoxia the hydroxylation is inhibited and the accumulated HIFα forms with HIFβ a transcriptionally active dimer. HIF-P4Hs have three isoenzymes HIF-P4Hs 1-3 (also known as PHDs 1-3, and EglNs 2, 1 and 3, respectively) in vertebrates, isoenzyme 2 being the most abundant and major form in most tissues. HIF-P4Hs belong to the enzyme family of 2-oxoglutarate-dependent dioxygenases (2-OGDDs).

Epigenetic modifications to nucleic acid and protein components of the chromatin are central regulators of eukaryotic transcription. These modifications include the reversible methylation of DNA and histones, and other modifications to histones, such as acetylation, phosphorylation and ubiquitination. The epigenetic marks to chromatin are “written” or “erased” by enzymes. Several of these “erasers” are also 2-OGDDs, such as the leukemia associated DNA demethylating ten-eleven translocation (TET) enzymes and a number of JmjC-domain containing histone lysine demethylases (KDMs). KDMs play an important role in the epigenetic regulation of gene expression.

Our research group’s main interest are the HIF-P4Hs 1-3, FIH, P4H-TM, TETs and selected KDMs. The central role of HIF-P4Hs in oxygen sensing makes them promising candidates for the treatment pathologic hypoxia, such as ischemic conditions. HIF-P4Hs can be targeted with synthetic 2-OG analogue inhibitors which can be used to initiate the hypoxia response in normoxia and which can therefore be called hypoxiamimetics. We have shown recently that activating the endogenous hypoxia response pathway genetically or pharmacologically by HIF-P4H inhibition protects mice from obesity, metabolic dysfunction, high-fat diet and aging-induced hepatic steatosis and atherosclerosis. It seems possible that HIF-P4H inhibition may have protective effects also in many other disease conditions, such as hepatic, inflammatory and immunological diseases. The KDMs are currently the least studied 2-OGDD family members. KDMs regulate development, cellular differentiation, senescence and genomic stability, disruption of which can have profound effects, as evidenced by recent data indicating that several JmjC KDMs are linked to the pathogenesis of a number of cancers. We showed recently that KDMs become inhibited with low concentrations of cancer-associated 2-OG analogues and treatment of cells with these compounds altered histone demethylatiom status. Our hypothesis is that the activity of specific KDMs is dependent on oxygen availability and similarly to the HIF-P4Hs, they act as nuclear oxygen sensors, and contribute to tumorigenesis. 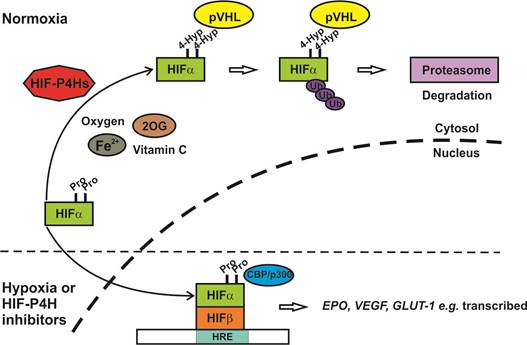 We were the first to produce and purify fully active recombinant human HIF-P4Hs and FIH and characterize in detail their catalytic and inhibitory properties that laid the basis for the development of HIF-P4H and FIH inhibitors aimed for therapeutic applications. One such HIF-P4H inhibitor, FG-4592 (Roxadustat), developed by our long-term collaborator FibroGen Inc. (www.fibrogen.com), that became the first-in-class drug gaining market approval for the treatment of anemia of chronic kidney disease.

We have shown that mice hypomorphic for the major HIF-P4H isoenzyme, HIF-P4H-2 (Hif-p4h-2gt/gt) are protected from cardiac and skeletal muscle ischemia due to their larger capillaries leading to improved perfusion and better preserved metabolism during ischemia. The Hif-p4h-2gt/gt mice are leaner than their wild-type (WT) littermates, they have less white adipose tissue (WAT) and its inflammation, better glucose tolerance and insulin sensitivity, lower serum cholesterol levels and improved HDL/LDL+VLDL ratio, and they do not develop hepatosteatosis upon aging or when fed with high fat diet. In short, the Hif-p4h-2gt/gt mice were protected against obesity and metabolic dysfunction. Treatment of WT mice with a pharmacological HIF-P4H inhibitor FG-4497 from FibroGen Inc., phenocopied the obesity and metabolic syndrome-opposing phenotype. Treatment of LDL receptor-deficient mice fed with HFD with FG-4497 protected them from atherosclerosis development. The mechanisms involved were HIF stabilization-driven changes in gene expression leading to beneficial modification in glucose and lipid metabolism, reduced adipose tissue inflammation and increased levels of protective autoantibodies, part of the innate immune system. We have also shown that the Hif-p4h-2gt/gt mice are protected from alcohol-induced fatty liver disease due to faster clearance of the toxic metabolites and higher antioxidative capacity.

We have identified and characterized a mutation in the HIF-P4H-2 gene in Tibetans that are genetically adjusted to high altitude-induced hypoxia. This mutation increases the affinity for oxygen allowing efficient HIF-alfa degradation under hypoxia, which can be beneficial in blunting an excessive erythropoietic response causing for example thrombosis.

While activation of the hypoxia response by inhibition of HIF-P4H-2 appears beneficial for adult metabolic health the outcome of pregnancies at high altitude, and thus hypoxia, is reduced birth weight of the fetuses which predisposes to metabolic diseases later in life. We  therefore sought to determine the effects of hypoxia on maternal glucose and lipid metabolism and their contributions to fetal weight. Using C57BL6/NCrl mice housed throughout gestation in normobaric hypoxia (15% oxygen) or normoxia, were showed that the fetal weight at E17.5 was 7% lower under hypoxia than normoxia. The hypoxic compared with normoxic dams had ~20% less gonadal WAT at mid and late gestation. The hypoxic dams had better glucose tolerance and insulin sensitivity compared with normoxic dams and failed to develop insulin resistance in late gestation. They also had increased glucagon levels. Glucose uptake to most maternal tissues was ~2-fold greater in the hypoxic than normoxic dams. The alterations in maternal metabolism in hypoxia were associated with upregulation of HIF target genes that served to increase glycolytic metabolism. We conclude that environmental hypoxia alters maternal metabolism by upregulating the HIF-pathway, and suggest that interventions that antagonize such changes in metabolism in high-altitude pregnancy may be helpful for preserving fetal growth.

We have also shown using genetic mouse models and FG-4497 administration that all three HIF-P4H isoenzymes and a P4H-TM characterized by us contribute to the regulation of erythropoiesis, and that lack of P4H-TM results in age-related retinal and renal alterations. We recently associated familial human mutations in the P4H-TM gene to a neurological HIDEA syndrome, characterized by hypotonia, intellectual disability and eye abnormalities. We also showed that mice lacking P4H-TM have a unique neuronal phenotype characterized by decreased fear and anxiety and increased social behavior .

Identification of mutations in the Krebs cycle enzymes succinate dehydrogenase (SDH) and fumarate hydratase (FH) and in the mitochondrial isocitrate dehydrogenase 2 (IDH2) and its cytosolic isoenzyme IDH1 in human cancers has rekindled the idea that altered cellular metabolism can transform cells. We have shown that the 2-OG analogues succinate, fumarate and (R)2-hydroxyglutarate (R-2HG), which accumulate in these mutations, respectively, signal at least partly via HIF-P4Hs and HIF. Our data identified fumarate and succinate also as potent TET inhibitors, and demonstrated that they down-regulated global genomic 5-hydroxymethylcytosine levels and affected gene expression. We made a highly surprising finding that R-2HG, produced by the IDH mutant gliomas and leukemias and some other cancers, acts as an agonist for HIF-P4Hs, whereas it inhibits several other 2-OGDDs. R-2HG downregulated HIFalfa which promoted cellular proliferation and soft agar growth of IDH mutant astrocytes linking R-2HG and HIF-P4Hs to oncogenic transformation. We also showed that R-2HG was sufficient to promote leukemogenesis and its effects were reversible providing evidence for targeted treatment of the IDH mutant leukemias. We have also shown recently that HIF1alfa accumulation in triple-negative breast cancers is caused by self-inactivation of HIF-P4H-2 in the absence of cysteine. This is caused by excessive secretion of glutamate by these tumours, which blocks the intake of cystine and results in depletion of intracellular cysteine. Cysteine, or vitamin C, were required to prevent auto-oxidation of specific intramolecular cysteine residues in HIF-P4H-2, indicating that in addition to O2  HIF-P4H-2 can sense cysteine levels. Our data on the histone lysine demethylases (KDMs) show that R-2HG was a particularly efficient inhibitor of KDM6A, KDM4A and KDM4B, followed by its enantiomer S-2HG. This finding was supported by accumulations of the histone H3K9me3 and H3K27me3 marks in cells treated with the cell-permeable forms of these compounds. KDM5B was especially resistant to inhibition by R-2HG, while citrate was the most efficient inhibitor of KDM6B. We conclude that KDM catalytic activity is susceptible to inhibition by tumorigenic 2-OG analogues and suggest that the inhibition of KDMs is involved in the disease mechanism of cancers in which these compounds accumulate, such as the IDH mutations. Strikingly, we recently showed that among KDMs, KDM6A but not its paralogue KDM6B, is highly sensitive to hypoxia and possess a very high Km value for oxygen, and contributes to the control of chromatin and cell fate.

Our objective is to investigate activation of the hypoxia response pathway via HIF-P4H inhibition as a novel concept to treat hepatic, inflammatory and immunological diseases. Our second objective is to study the catalytic and inhibitory properties of KDMs, especially their potential to act as nuclear oxygen sensors and contribute to tumorigenesis. Our third objective is to unravel the role and function of P4H-TM.

The specific goals are:

Lower hemoglobin is good for health after all? It may protect against obesity a…

The University of Oulu at the forefront of hypoxia research