Ali Mobasheri is a Professor of Musculoskeletal Biology at the University of Oulu. His current research focuses on cartilage biology, specifically cellular metabolism, ion channel physiology, and biomarkers of osteoarthritis. But how has Mobasheri, whose background is originally in plant physiology and biochemistry, ended up studying osteoarthritis in Oulu? 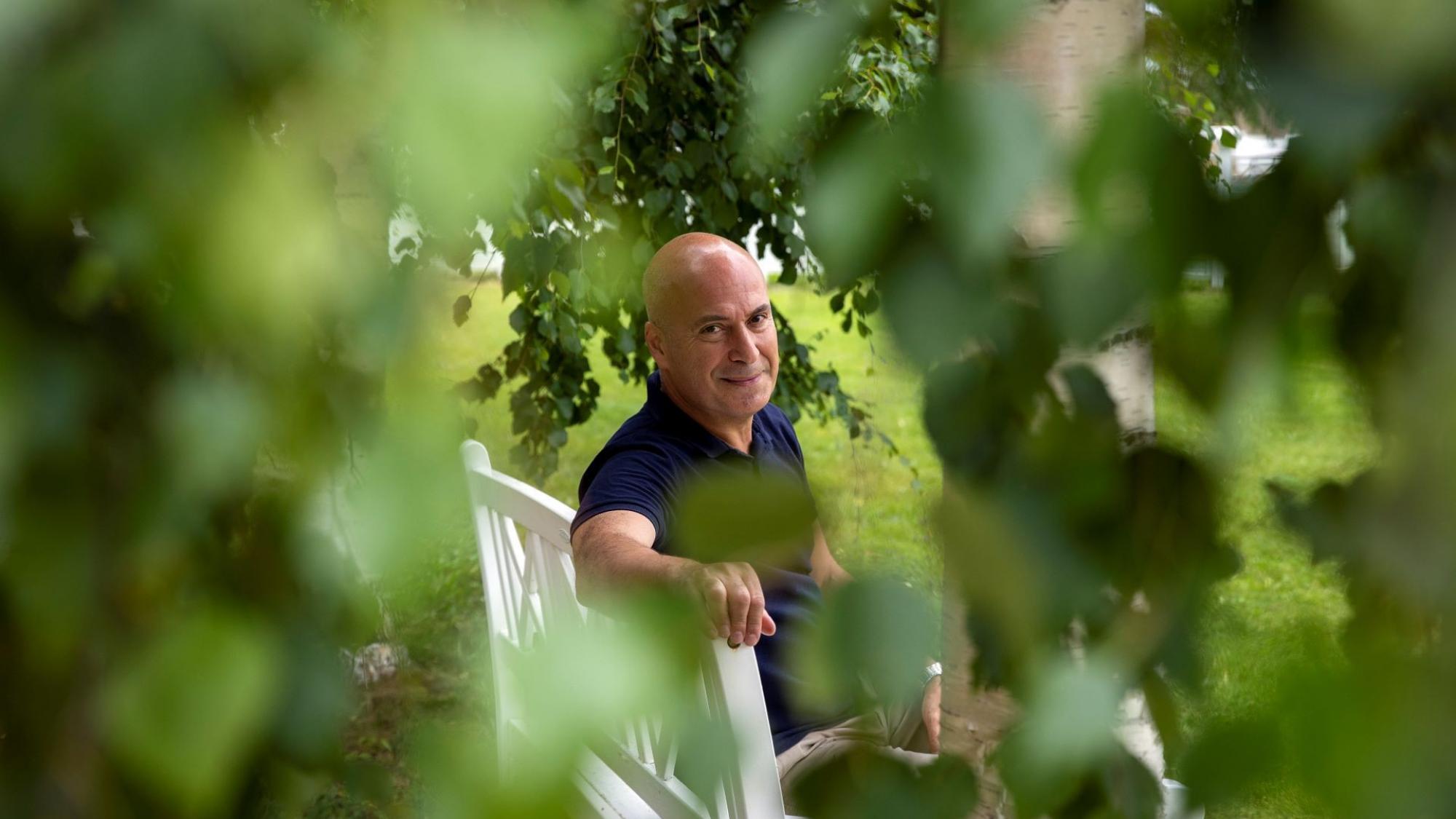 "Biology and chemistry and how things worked were always interesting to me. I'm also very interested in the natural world, plants and animals in their environment, and how we interact with them", Mobasheri reflects.

Mobasheri's interest in nature and chemistry started to crystallize in school leading him to study and research plant physiology and biochemistry. Later, he became one of the leading names in research on arthritic diseases. He is now a professor specializing in osteoarthritis, but Mobasheri's background in botany and veterinary medicine continues to bring new perspectives to his work.

From plants to animals and arthritis in humans

As a young student, Mobasheri was not inspired by the social and political sciences or mathematics in the same way as he was drawn to the natural sciences that explained the fascinating world around him.

"At school, I remember the subjects that I loved were biology and chemistry. Biology was the area I was good at, and I had a real passion for it," Mobasheri says.

Mobasheri's curiosity for research arose while he was at university. "I knew that I wanted to research, but I wasn't sure about undertaking a Ph.D. at that point, but I knew I wanted to do a master's degree first in a university abroad," he recalls.

Mobasheri applied to several Canadian institutions and got a scholarship at the University of Toronto to study there for two years. His focus back then was on plant physiology and biochemistry.

"At that time, genetic engineering of plants was only just beginning, and I thought that maybe that could be a good area to focus on. So, I did my Master's in the Department of Botany at the University of Toronto," Mobasheri tells.

Shortly after completing his Master's, Mobasheri and his family decided to return back to the UK. In retrospect, this may have been a turning point in Mobasheri's research career, as these events led him to become interested in arthritic diseases.

"At that time, my grandmother was suffering a lot from rheumatoid arthritis. I remember going to her house, and her knee had swollen to the size of a volleyball," Mobasheri explains.

Eventually, Mobasheri's grandmother received help from the doctors, but the experience was eye-opening to him, and her grandmother's words stuck with him.

"She told me to give up this nonsense working on plants and work on something really important, like arthritis,” Mobasheri recalls.

Despite the slight acrimony of his grandmother's comment, Mobasheri began to reflect on his research career.

“I have great respect for the elderly, especially in my family, and I take their advice with a high level of respect. I did not think that working on plants was nonsense, but I realized that I could do a Ph.D. in a biomedical discipline," Mobasheri continues.

He decided to apply for fully funded scholarships to work on arthritic diseases. The journey led Mobasheri to study the physiology of joints at the University of Oxford. The research journey with arthritis had begun.

Mobasheri is an explorer, rather like a modern-day Marco Polo. Like Ferdinand Magellan, he has navigated the world, but multiple times and in both directions, giving lectures and presentations as he explored.

So, after his Ph.D. at Oxford, Mobasheri worked at various institutions in the UK. The early years of his post-doc career, Mobasheri spent mainly teaching, which he still sees as a significant part of his job today.

"I love teaching! In all these conferences I now attend, even though they are about research, you need to be able to communicate, educate and inspire. It's basically teaching, but the audience is different," Mobasheri states.

However, his passion for research grew, and Mobasheri moved from his teaching-oriented job towards a full-time research career.

That led him to work in veterinary medicine at several institutions in the UK. "I worked on horse and dog osteoarthritis in three veterinary schools in the UK," Mobasheri tells.

However, this changed in 2016. The Brexit happened. Suddenly, Britain was no longer part of the EU, and working as an international scientist changed drastically. Research funding from the EU was no longer going to be an option. This lead Mobasheri, among many others, to search for new positions outside the UK.

"I wanted to work in Europe, and I decided to start prospecting and negotiating a new career in a new Europe excluding Britain" he states. In 2018 the journey led him to Lithuania, where Mobasheri still holds a position as a Chief Researcher and International Advisor at the State Research Institute Centre for Innovative Medicine in Vilnius. Mobasheri managed to secure research funding from industry, the Lithuanian Research Council, and European Structural Funds in order to continue his research.

But as has already been hinted, Mobasheri is a man of many projects and interests. So was the case during his time in Lithuania. “It was a 50 percent position, so I started consulting for the industry for the rest of my time. I was consulting with Pfizer Consumer Healthcare and Image Analysis Group (IAG) in London and then gradually started working with various pharmaceutical and consumer health companies," Mobasheri says.

At this point, Mobasheri was first introduced to the University of Oulu.

"Then I came here to the University of Oulu, for the first time in March 2019. I was invited to participate in the BioPhotonics for Healthcare conference,” he says.

Mobasheri was invited to give a presentation on why novel diagnostic tools are needed for osteoarthritis in a clinical setting and how biomarkers can be used in this context.

“During that visit, I was also invited to give a seminar at the Medical School which eventually lead to a fractional position here. So, I must have given a very good seminar, otherwise, I suppose I wouldn't be here!” Mobasheri says with a twinkle in his eye.

"We can learn a lot from nature"

Mobasheri's background reflects his thinking and the way he conceives research and, more broadly, the relationship between humans and nature.

"The diseases are pretty similar in humans and companion animals, for example, dogs, cats, and horses. In many cases, they suffer the same chronic diseases as we do, including cardiovascular diseases, metabolic diseases, arthritic diseases, and so on", Mobasheri explains.

Because of his background in veterinary preclinical sciences, Mobasheri is capable of establishing many connection points between humans and animals. Similarities can be found in unexpected places, such as the “One Health, One Medicine” concept, which is based on the idea that human and animal health are linked to each other and to broader environmental and natural contexts.

"The production animals that make up our food have the capacity to develop arthritic diseases, such as osteoarthritis, because of the excessive weight gain in a short period of time. Of course, they don't experience the disease to its fullest since they are sacrificed for the food chain before those diseases fully manifest themselves. But the way we breed and overfeed production animals for food production also reflects how obesity impacts the early development of arthritic diseases in humans. In a way, the phenomena can also be seen as a reflective model of society and a tool to help view obesity as a major societal problem", Mobasheri elaborates.

Mobasheri sees many possibilities between nature, plants, and human medicine.

"I'm collaborating on projects looking at the natural screening of extracts of plants to see which plants potentially have, for example, anti-inflammatory and pain relief properties. So, my interest in plants is always there. I might be working with arthritic diseases, but I still keep botany in mind when I do research," Mobasheri explains.

Mobasheri's journey from plant physiology and veterinary science toward solving the mysteries of osteoarthritis in humans is fascinating. The multidisciplinary background and open interest in other fields and the surrounding nature are without question refreshing. A medical researcher with a history of plant physiology and an interest in climate change and environmental protection is breaking barriers between disciplines and redrawing the norms.

This is evident in how Mobasheri sees his scientific research concerning the surrounding society.

"The thing that fascinates me most about research is the endeavor to figure out what is it that can be learned from nature for the benefit of mankind and how we can ensure that the knowledge is also benefitting nature, especially the domesticated animals that we have come to depend on. Sustainability is an important component of this. In everything that we discover in science and medicine, we need to think long-term about sustainability beyond immediate impacts on humanity and modern society", Mobasheri summarizes.

Thora Herrmann’s research is a marriage between science and art